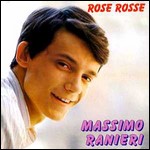 He was born in Naples (at Santa Lucia), the fifth of eight children in the family. When he was 10, young Giovanni would sing at restaurants, wedding receptions, etc. He was discovered by a music producer about four years later and was flown to New York to record an EP under the name of Gianni Rock.

He recorded four songs in 1964: Tanti auguri signora, Se mi aspetti stasera, Non chiudere la porta, and La Prima Volta. None of the records were successful, primarily because young Gianni's voice was changing. Two years later, he would re-emerge under his new stage name, Massimo Ranieri. In 1966, he made his TV debut singing "Bene Mio". A year later, he made another TV appearance singing, "Pietà per chi ti ama". In 1968, he recorded two more songs: "Da Bambino", Ma L'amore cos'è" and "Preghiera".

But it wasn't until 1969, when he really became successful and became a teen idol making all the young girls scream for him, when he sang "O Sole Mio" on live TV. Soon, in most every TV appearance he made, you could hear the girls screaming in the background. That same year, he had a string of hits: "Rita", "Se bruciasse la citta", "Quando l'amore diventa poesia", "Il mio amore resta sempre", "Rose rosse" and "Zingara". In 1970, "Vent'anni", "Sogno d'amore", "Sei l'amore mio", "Aranjuez Amore Mio", and "Candida". During that year, he decided to venture into acting.

Massimo's screen debut, Metello received rave reviews from critics, and won him the David DiDonatello award for best actor for portraying the title character. He co-starred with Anna Magnani in the television film La Sciantosa, later that year. In 1971, Massimo recorded the songs "Adagio Veneziano", "Via del Conservatorio", and "Io e Te". He represented Italy in the 1971 Eurovision Song Contest in Dublin, Ireland, where he placed 5th with the song "L'Amore E' Un Attimo. "

That same year, he fathered a daughter, Cristiana, out of wedlock with Franca Sebastiani. He didn't have anything to do with the raising of his daughter, saying that he was too young and inexperienced for fatherhood, and that it would be damaging to his career. He was never linked with any other woman thereafter. He didn't have any contact with his daughter until they met when she was about 20-years-old.

In 1972, he released the songs "Ti Ruberei", "O Surdato 'nnamurato", and "Erba di Casa Mia"; in 1973, "Amo Ancora Lei". He returned to the Eurovision Song Contest that year, in Luxembourg, to represent Italy with "Chi sarà con te", where he placed 13th. In 1974, came the singles "Te Voglio Bene Assaie", "Immagina", and "Per Una Donna". During that year, he filmed Salvo D'Acquisto, where he portrayed a Carabinieri policeman who was executed by the Nazis during World War II.

When his singing career started to decline in 1975, Massimo concentrated on his acting career, both in the cinema and, most importantly, as a stage actor: he collaborated with the directors Mauro Bolognini, Giuseppe Patroni Griffi, Giorgio de Lullo, Giorgio Strehler and Maurizio Scaparro, performing a wide range of material from modern plays and musicals, to Molière and Shakespeare.

In 1988, he made a comeback with the song, "Perdere L'Amore", which won the Sanremo Festival, that year. In 1997, he made another comeback with "Ti parlerò d'amore". That same year, he did the Italian voice-over for Quasimodo in Disney's "Hunchback of Notre Dame", where he also sang Quasimodo's part as well.

On 16 October 2002, Massimo Ranieri was nominated Goodwill Ambassador of the Food and Agriculture Organization of the United Nations (FAO).[1] In 2004, he made his first French film, a trilogy series called Les Parisiens, where he played a street artist. In 2005, he returned on the stage with the show "Accussì Grande", after a long bout with illness, from which he fully recovered.

At the start of 2007, he decided to publicly acknowledge his long-estranged daughter, and embraced her for the first time on live TV. It was a tearful reunion between father and daughter. During that year, he was in a docu-film called Civico 0, where he played Guilano, a fruit vendor, who becomes homeless after the death of his mother. In 2008, he starred in the film L'Ultimo Pulcinella.

In 2009, he played the storyteller in the play, Polvere di Baghdad, directed by Maurizio Scaparro. In February 2007, he started a concert tour of Italy, titled "Canto perché non so nuotare...da 40 anni" which lasted for more than two years, with more than 500 shows, was made into a CD and a DVD, which went platinum.

In 2010, Massimo was featured in Passione, a documentary about the history of music from Naples, Italy, directed by Italian-American actor, John Turturro. In November 2010, he took part in the miniseries remake of the classic play, Filumena Marturano, produced by Italian TV RAI Uno, with Mariangela Melato in the title role. Massimo portrayed Filumena's husband, Domenico Soriano.

He plays the lead in the TV film "Una città in fondo alla strada" directed by Mario Severino, with Marisa Merlini and Scilla Gabel.

He dubbs Nathan Lane's voice in Mike Nichols' "The birdcage"

"Fondali notturni" directed by Nino Russo, with Ida Di Benedetto. For this film he was given the Fellini Award of Best Actor.

"Poveri ma belli" a musical taken from the film by Dino Risi, with music by Gianni Togni. With Bianca Guaccero, Antonello Angiolillo and Michele Carfora.

"Volere Volare, Il meglio del Made in Italy" award, as public person of the year
"La Pigna d'oro" award for his whole career.

Special Jury Prize of the Festival of Busto Arsizio for the film "L'ultimo Pulcinella" which also was awarded the Best Director prize.
Premio Flaiano (2nd time).

Masismo Ranieri has never been married. In 2007, the singer has recognized the illegitimate daughter (Cristiana) born in 1971 from the relationship with Franca Sebastiani. He also became grandfather in July 2011.[2]

This article uses material from the article Massimo Ranieri from the free encyclopedia Wikipedia and it is licensed under the GNU Free Documentation License.

You're My Best Friend Queen
Update Required To play the media you will need to either update your browser to a recent version or update your Flash plugin.