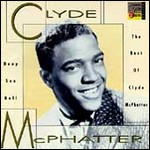 McPhatter's high-pitched tenor voice was steeped in the gospel music he sang in much of his early life. He was the lead tenor of the Mount Lebanon Singers, a gospel group he formed as a teenager.[3] He was later the lead tenor of Billy Ward and his Dominoes and was largely responsible for the initial success of the group. After his tenure with the Dominoes, McPhatter formed his own group, the Drifters, and later worked as a solo performer. Only 39 at the time of his death, he had struggled for years with alcoholism and depression and was, according to Jay Warner’s On This Day in Music History, "broke and despondent over a mismanaged career that made him a legend but hardly a success."[4][5]

McPhatter was born in the community of Hayti, in Durham, North Carolina, on November 15, 1932. He was raised in a Baptist family, the son of the Rev. George McPhatter and his wife Beulah (some accounts refer to her as Eva). Starting at the age of five, he sang in his father's church gospel choir along with his three brothers and three sisters. When he was ten, Clyde was the soprano-voiced soloist for the choir. In 1945, Rev. McPhatter moved his family to Teaneck, New Jersey, where Clyde attended Chelsior High School. He worked part-time as a grocery store clerk and was promoted to shift manager upon graduating high school.[3] The family then relocated to New York City, where Clyde formed a gospel group, the Mount Lebanon Singers.[8]

In 1950, after winning the coveted Amateur Night at Harlem's Apollo Theater contest, McPhatter returned to his job as a store manager but was later recruited by Billy Ward and his Dominoes and was present for the recording of "Sixty Minute Man" for Federal Records, produced by Ralph Bass.

Billy Ward and his Dominoes was one of the top R&B vocal groups in the country, garnering more popularity than the Clovers, the Ravens and the Five Keys, largely due to McPhatter's fervent, high-pitched tenor. In his book The Drifters, Bill Millar named Ben E. King, Smokey Robinson of the Miracles, Sammy Turner, and Marv Johnson among the many vocalists who patterned themselves after McPhatter. "Most important," he concluded, "McPhatter took hold of the Ink Spots' simple major chord harmonies, drenched them in call-and-response patterns and sang as if he were back in church. In doing so, he created a revolutionary musical style from which—thankfully—popular music will never recover."[9] Strangely enough, McPhatter didn't think much of his own singing abilities.

After recording several more songs with the Dominoes, including "Have Mercy Baby", "Do Something for Me," and "The Bells", McPhatter left the Dominoes on May 7, 1953. He was sometimes passed off as "Clyde Ward, Billy's little brother." Others assumed it was Billy Ward doing the lead singing. As a member of the Dominoes, McPhatter did not earn much money; Ward paid him $100 a week, minus deductions for food, taxes, motel bills, etc. In an interview in 1971 McPhatter told journalist Marcia Vance that "whenever I'd get back on the block where everybody'd heard my records—half the time I couldn't afford a Coca-Cola."[10] Because of such occurrences, and because he was frequently at odds with Ward, McPhatter decided he would quit the Dominoes, intent on making a name for himself. He announced his intention to quit the group, and Ward agreed to his leaving provided that McPhatter stayed long enough to coach a replacement. Auditions for a replacement were held at Detroit's Fox Theater, and a young Jackie Wilson later took over as lead tenor for the Dominoes. The position influenced Wilson's singing style and stage presence. "I fell in love with the man's voice. I toured with the group and watched Clyde and listened..."—and apparently learned.[3] Privately, McPhatter and Ward often argued, but publicly McPhatter expressed his appreciation of Ward for giving him his start in entertainment. "I think Billy Ward is a very wonderful musician and entertainer. I appreciate all he did for me in giving me my start in show business."[10]

Ahmet Ertegün, founder of Atlantic Records and Jerry Wexler, eagerly sought McPhatter after noticing he was not present for an appearance the Dominoes once made at Birdland, which was "an odd booking for the Dominoes", in Ertegün's words.[11] After locating him, McPhatter was then signed to Atlantic on the condition that he form his own group. McPhatter promptly assembled a group and called them the Drifters. They recorded a few tracks in June 1953, including a song called "Lucille," written by McPhatter himself. This group of Drifters did not have the sound Atlantic executives were looking for however, and Clyde was prompted to assemble another group of singers. The revised lineup recorded and released such hits as "Money Honey," "Such a Night," "Honey Love," "White Christmas" and "Whatcha Gonna Do," with the record label displaying the group name "Clyde McPhatter & the Drifters" on the first two singles, later changed to "The Drifters featuring Clyde McPhatter".

In late 1954, McPhatter was inducted into the U.S. Army and assigned to Special Services in the continental United States, which allowed him to continue recording. After his tour of duty, he left the Drifters and launched a solo career. The Drifters continued as a successful group, but with many changes in personnel, and the group assembled by McPhatter was long gone by the time of their greatest successes after he left the group. The initial members of the Drifters McPhatter assembled, often called the "embryonic" group before "Money Honey", were mostly from the Mount Lebanon Singers.

Upon his departure from The Drifters, McPhatter unwisely sold his share of the group to the band's manager George Treadwell, a decision that he later came to regret, after realizing that he caused his fellow musicians to experience unprofitability and the group essentially became a revolving door line-up with recycled members on a ridiculous $100 weekly salary and paid virtually no royalties.[12].

Just after his military discharge, McPhatter recorded his first solo hit, "Love Has Joined Us Together", with Ruth Brown. He released several R&B recordings in the next few years, including "Rock and Cry", "Seven Days" (later a bigger hit for Tom Jones), "Treasure of Love," "Let Me Know", "Just to Hold My Hand", and his biggest solo hit, "A Lover's Question," written by Brook Benton and Jimmy T. Williams, which peaked at number 6 in 1958. The song "Lover Please," written by the country artist Billy Swan, was released in 1962. McPhatter's 1956 recording "Treasure of Love" was his first number 1 hit on the R&B charts as a solo artist and spent one week in the UK Singles Chart. It reached number 16 on the U.S. pop charts, sold over two million copies in the United States alone, and was awarded a gold disc by the RIAA.[13]

After leaving Atlantic Records, McPhatter then signed with MGM Records and released several more songs, including "I Told Myself a Lie" and "Think Me a Kiss" (1960) and his first single for Mercury Records, "Ta Ta." His tenure on these labels proved to be less fruitful than his time with Atlantic. He moved to other record labels and recorded more singles, including "I Never Knew" and his final Top Ten hit, "Lover Please," which made it to number 7 in 1962. After "Lover Please", McPhatter's career took a downward turn, as musical styles and tastes were constantly changing during the 1960s. He turned to alcohol abuse, sporadically releasing recordings that failed to chart.

In 1968, McPhatter moved to England, where he still had something of a following, utilizing the UK band ICE as backup.

McPhatter returned to the U.S. in 1970, making a few appearances in rock-and-roll revival tours, but lived mostly as a recluse. Hopes for a major comeback with a Decca album were crushed on June 13, 1972, when he died in his sleep at the age of 39, of complications of heart, liver, and kidney disease, brought on by alcohol abuse - abuse fueled by a failed career and resentment he harbored towards the fans he felt deserted him.[10] In his interview with journalist Marcia Vance, McPhatter said, "I have no fans."[14] He died at 1165 East 229th Street, Bronx, New York, where he had been living with Bertha M. Reid; they were traveling together as he tried to make a comeback.

McPhatter was a resident of Teaneck, New Jersey, at the time of his death.[15] He was buried at George Washington Memorial Park in Paramus, New Jersey.[16][17]

Ruth Brown acknowledged in her later years that McPhatter was the actual father of her son Ronald, born in 1954.[18] Ron now tours with his own group named after his father - Clyde McPhatter's Drifters.[19]

In 1987, McPhatter was posthumously inducted into the Rock and Roll Hall of Fame.

The Rockabilly Hall of Fame recognized his pioneering efforts.

The Original Drifters were inducted in the Vocal Group Hall of Fame in 1998.

The United States Postal Service issued a stamp in his honor in 1993.

McPhatter was inducted into the North Carolina Music Hall of Fame in 2009.[20]

This article uses material from the article Clyde McPhatter from the free encyclopedia Wikipedia and it is licensed under the GNU Free Documentation License.

Photograph Ringo Starr
Update Required To play the media you will need to either update your browser to a recent version or update your Flash plugin.