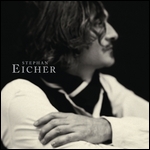 His songs are sung in a variety of languages, including French, German, English, Italian, Swiss German, and Romanche. Sometimes he even uses different languages in the same piece.

His success started in German-speaking countries in the 1980s when as part of the band Grauzone he had a hit single "Eisbär". With hit songs such as "Combien de Temps" and "Oh Ironie", his popularity spread Europe-wide with various albums, tours, and chart success in France and Switzerland.

Stephan Eicher was born in the rural municipality of Münchenbuchsee not far from Bern. He is of Alsatian mother and Yeniche father, also a musician.

He was musically trained at the academy of art in Zurich, where he and others also learned how to use the computer for composing music.

He released his first single "Eisbär" together with his brother Martin on the album Grauzone in 1980. He became interested in French songs by Jacques Dutronc, Georges Brassens, and Serge Gainsbourg, and these influences resulted in him creating the album Les Chansons Bleues. This album is also inspired by the American singers he listened to during his youth, such as Patti Smith, Johnny Cash, and Bob Dylan.

His two following albums began to establish his reputation. The album, I Tell This Night, and the single "Two People in a Room" were released in 1985. It peaked on the Swiss Charts at number ten and stayed twelve weeks. Two years later, the album Silence reached number three and was in the Swiss Top 10 for fourteen weeks. Both albums were created by Stephan Eicher almost single-handedly.

With 1989's "My Place", Stephan Eicher went in a different direction. The French lyrics were written by his friend, author Philippe Djian. His largest commercial success came in 1991 with the album Engelberg, which spent five weeks at number one in Switzerland and 46 weeks on the charts in total. The song "Dejeuner En Paix" was also number two in France. It is the beginning of a collaboration with Manu Katché and Pino Palladino which will last until the release of 1000 vies in 1996. With all his following albums, Stephan Eicher regularly reached the top five on the Swiss album charts.

Since 1989, his song lyrics have been written by Djian.

In 2001, Eicher released his first greatest hits compilation album entitled Hotel*s. For many years, the hotel Hess on the Swiss Engelberg was his second home. Martin Hess, the hotelier couple's son, became his close friend and producer. At the hotel, the albums Engelberg and Louanges developed. Eicher selected the title Hotel*s as homage to this grand hotel, which was torn down in the same year. For the title selection for the album, he let the fans co-ordinate with the official homepage.

Cover versions of his songs

His song "Combien de Temps" has been remixed by Flood.

The metalband Stahlhammer released a cover version of "Eisbär" on their album Eisenherz.

On the newer edition of the album Wahrheit oder Pflicht by Oomph! a cover version of "Eisbär" is included as a bonus track.

This article uses material from the article Stephan Eicher from the free encyclopedia Wikipedia and it is licensed under the GNU Free Documentation License.

Le roi du bal Marc Ollivier
Update Required To play the media you will need to either update your browser to a recent version or update your Flash plugin.