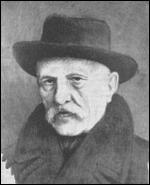 Antonio Smareglia (5 May 1854 15 April 1929) was an Austro-Hungarian opera composer of Croatian and Italian ethnicity.

Antonio Smareglia was born in the town of Pola (on the Istrian peninsula, then located in Austria-Hungary, now in Croatia), in a house on Via Nettuno which still stands and in which there is now a small museum of his life and work. He was the sixth, but first surviving, child of an Italian father, Francesco Smareglia from Dignano - and a Croatian mother - Giulia Stiglich from Iii. The composer chose to set his most famous opera, Nozze istriane, in his father's village.

Smareglia married Maria Jetti Polla, and they had five children. He became blind at the age of 46. Various people took dictation from him including his sons Ariberto and Mario, and students and friends including Primo dalla Zonca, Gastone Zuccoli, and Vito Levi. Smareglia died in Grado in 1929.

This article uses material from the article Antonio Smareglia from the free encyclopedia Wikipedia and it is licensed under the GNU Free Documentation License.

Sur La Route Gérald De Palmas
Update Required To play the media you will need to either update your browser to a recent version or update your Flash plugin.