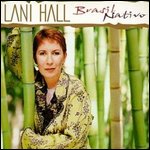 Lani Hall Alpert (born November 6, 1945 in Chicago, Illinois) is an American singer, lyricist, author and the wife of trumpeter, bandleader and music entrepreneur Herb Alpert. From 1966 to 1971 she performed as vocalist for Sérgio Mendes & Brasil '66. In 1972 she released her first solo album Sundown Lady, but she may be best known for her rendition of the theme song to the 1983 James Bond film Never Say Never Again. 1985 she was awarded a Grammy Award for Es Fácil Amar as "Best Latin Pop Performance." After that year she largely retired, resurfacing in 1998 with the solo album Brasil Nativo. In 2011 the album I Feel You was released, on which she performs alongside her husband Herb Alpert.

Her first public appearances occurred in Old Town, Chicago 1965 and early 1966. At one of those performances, she was heard by Brazilian Bossa Nova pianist and bandleader Sérgio Mendes, who happened to be on tour in Chicago. His group, Brasil '65 was disbanding, and he invited Hall to come to Los Angeles and be a part of his new project, Sérgio Mendes & Brasil '66. She agreed, and the group rehearsed in LA, eventually signing a contract with A&M Records.

Unlike the previous incarnation, Brasil '66 was an instant success - making a significant impact on the charts with its first single, a version of the Brazilian song "Mas Que Nada". Much of the song's appeal was due to the distinctive, multi-tracked vocals of Hall.

A series of popular interpretations followed, including their take on The Beatles' "The Fool on the Hill" and "Day Tripper". Though many associate her with Brasil '66's hit rendition of Burt Bacharach's "The Look of Love" on the album Look Around, which reached #4 on the pop charts in 1968, the lead on that single was actually handled by Mendes's other singer of that period, Janis Hansen.

The band toured alongside A&M labelmates (and label founder) Herb Alpert and the Tijuana Brass in 1966. Mid-way through the production of the folk-rock concept album Stillness she left Brasil '66 in 1971, coinciding with the arrival of Mendes's wife Gracinha Leporace into the group. In December 1974 she married Herb Alpert at his Malibu home.[1] She converted to Judaism.

With Alpert assuming production and arranging duties, Hall embarked on a solo career, beginning with 1972's Sun Down Lady and following up with Hello It's Me in 1975. She recorded regularly throughout the 70s and 80s, including singing the title song to the James Bond film Never Say Never Again in 1983 produced by Mendes and Alpert. In 1986, she again worked with Sérgio Mendes, appearing on one track on his album Brasil '86.

Beginning in 1982, Hall recorded several successful Latin pop albums in Spanish, culminating in 1985's Es Fácil Amar, produced by Albert Hammond, for which she received the Grammy Award for Best Latin Pop Performance.[2] Among her Spanish hits were "Un Amor Así" and "De Repente El Amór," duets with José Feliciano and Roberto Carlos respectively; "Para Vivir Así," which features Herb Alpert on trumpet; and another duet, "Te Quiero Así" with José José (who also began his career with a bossa nova/jazz band). She recorded "Corazón Encadenado" with Camilo Sesto in 1984.

In the mid-80s, Lani Hall contracted a debilitating case of EpsteinBarr virus and was forced to take a reprieve from performing. She returned in 1998 with the album Brasil Nativo on the Windham Hill label. In 2008, she reunited with Mendes again, performing vocals on the song "Dreamer" on his album Encanto The song also featured Herb Alpert on trumpet, marking the first (and to date, only) time that Hall, Mendes and Alpert had ever performed together.

In 2007, she and Alpert began performing with a band consisting of pianist/composer Bill Cantos, bassist Hussain Jiffry and drummer/percussionist Michael Shapiro, developing new arrangements for jazz standards and Brazilian songs. From then until the present, they have continued to tour, and have released two CDs for Concord Music Group, Anything Goes in 2009 and I Feel You in 2011.

As a young girl, Hall began writing poetry. She began writing short stories in 1982 while on tour in Mexico City. In 2012 she published the book Emotional Memoirs & Short Stories. The book, which was written over the course of more than 30 years, contains "ten stories of fiction-and-fact [about] women who were struggling to navigate the uncertain waters of many life-altering situations."[3]

This article uses material from the article Lani Hall from the free encyclopedia Wikipedia and it is licensed under the GNU Free Documentation License.

I Feel Lucky Mary Chapin Carpenter
Update Required To play the media you will need to either update your browser to a recent version or update your Flash plugin.