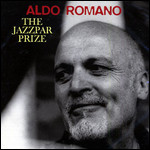 Romano moved to France as a child and by the 1950s he was playing guitar and drums professionally in Paris, but his career gained notice when he started working with Don Cherry in 1963. He recorded with Steve Lacy and would go on to tour with Dexter Gordon among others. In the 1970s he moved into rock-influenced forms of jazz fusion and in 1978 made his first album as a leader. In the 1980s he returned to his earlier style for several albums. Although he has lived most of his life in France he has retained an affection for Italy and has set up a quartet of Italian jazz musicians. Romano also played a role in starting the career of French-born Italian-French pianist Michel Petrucciani. In 2004 he won the Jazzpar Prize.

With Rolf Kühn and Joachim Kühn

This article uses material from the article Aldo Romano from the free encyclopedia Wikipedia and it is licensed under the GNU Free Documentation License.