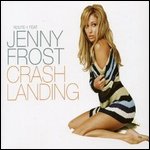 Jennifer 'Jenny' Frost (born 22 February 1978) is an English singer, dancer, television presenter and model. She was a member of girl group Precious before replacing Kerry Katona in chart topping band Atomic Kitten from 2001 until they split in 2004, Frost returned with the group in 2005, 2006 and 2008 for one-off appearances but chose not to return for their 2012 re-formation and was subsequently replaced by Katona. Frost presented makeunder show Snog Marry Avoid? from 2008 to 2011. In 2011, she co-presented OK! TV alongside Jeff Brazier.

Frost was born in Wallasey, Merseyside [1][2] and grew up in Manchester. She loved music from an early age. Her earliest concert experience was when her father took her to a Level 42 concert at the age of nine.[3] Sport and dancing were Frost's favourite activities, however modelling was her dream. After attending St Monica's High School she started to work for the BBC Television doing the Holiday programme and travelling around the world.

Frost started her musical career in 1998 in the group Precious, who were the UK entry at the Eurovision Song Contest 1999, with the song "Say It Again". The song was a top 10 hit in the UK Singles Chart and came twelfth in the contest itself. Subsequent releases by Precious enjoyed only modest success, and their debut album failed to chart at all, ultimately leading the group to go their separate ways in 2001. Frost moved on by replacing Kerry Katona in Atomic Kitten in 2001. After the release of their third studio album, Atomic Kitten split in 2004 although reformed a year later in 2005 and again in 2008. On 4 March 2012 it was confirmed that Atomic Kitten would reform but was later confirmed that Frost would not be returning to the group and would be replaced by Kerry Katona.[4] Hamilton has since confirmed that Frost would be welcomed back if she wanted to rejoin the group in the future.[5]

After the split of Atomic Kitten, Frost embarked on a solo career and released her first single "Crash Landing" on 10 October 2005, which peaked at number 49 and thus failed to reach the Top 40.[6] Frost originally recorded the song for the band Route 1, but decided to remake it and shoot a music video for the song which featured her in a spaceship in a pink/purple setting.

In February 2009, Jenny Frost stated that she did not want to continue her work in music as a solo artist and she wanted to stay in the music industry only as a member of Atomic Kitten.[7]

She appeared on the 2005 edition of I'm a Celebrity...Get Me Out of Here! on the ITV network, where she was eliminated on day 14. Frost is also part of Storm Model Management and does various modelling assignments, for example being the body of Playboy's underwear range.[8][9]

She became the face for Nelsons (Homeopathy) Pure and Clear anti-blemish care products in January 2011. [10]

After Atomic Kitten's brief reunion in 2008, Frost stated she wanted to concentrate on a television presenting career. From July 2008, she has presented the very successful BBC Three programme Snog Marry Avoid?. The series returned to BBC Three in February 2009 for a second series and a third series in February 2010. A fourth series aired in early 2011. She competed in Channel 4's former reality series Famous and Fearless in January 2011. From 1317 and 20 June 2011 she guest co-presented OK! TV on Channel 5, she became a permanent presenter on 15 August,[11] the programme was later axed and last broadcast on 16 December.[12] She appeared on ITV game show The Chase in 2011 and won £1,000 for her chosen charity.[13] She has guest presented LIVE with... on Channel 5.[14]

Frost became engaged to DJ Dominic Thrupp in 2002 with plans to marry.[15] In September 2007, Frost confirmed on the television show, Loose Women, that she was expecting a baby boy. Her son, Caspar J. Thrupp was born on 9 October 2007.[16] The wedding was due to take place in January 2010 but was hastily cancelled following the death of Frost's mother Rita from lung cancer.[17] In August 2010, Frost confirmed that she had separated from Thrupp.[18]

Frost's father lives in Spain,[19] and in August 2011 she married Spanish scuba diving school owner Vicente Juan Spiteri in Ibiza, in a dress by Elie Saab.[20][21] Her twins, Blake and Nico, were born on 20 January 2013.

This article uses material from the article Jenny Frost from the free encyclopedia Wikipedia and it is licensed under the GNU Free Documentation License.

Free Like A Bird Naomi Candreia
Update Required To play the media you will need to either update your browser to a recent version or update your Flash plugin.