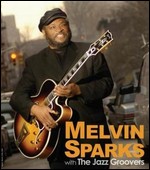 Sparks was born in Houston, Texas, United States, and raised in a musical family. He received his first guitar at age 11. Sparks began working in the rhythm and blues genre as a high school student, first with Hank Ballard and the Midnighters, and then with the Upsetters, a touring band formed by Little Richard, which also backed Jackie Wilson, Curtis Mayfield and Marvin Gaye.[2]

Sparks moved to New York City and worked as a session musician for Blue Note and Prestige Records. As part of the burgeoning soul-jazz scene of the late 1960s and early 1970s, Sparks often backed organists like Jack McDuff, Dr. Lonnie Smith and Charles Earland. Sparks released his debut album, Sparks!, for Prestige in 1970.[2]

He was seen on Northeastern television commercials as the voice of Price Chopper's House of BBQ advertising campaign.[3]

This article uses material from the article Melvin Sparks from the free encyclopedia Wikipedia and it is licensed under the GNU Free Documentation License.

All Good Things (Come To An End) Nelly Furtado
Update Required To play the media you will need to either update your browser to a recent version or update your Flash plugin.