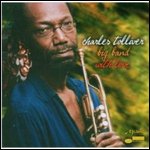 Tolliver was born in Jacksonville, Florida, where, as a child, he received his first trumpet as a gift from his grandmother. He attended Howard University in the early 1960s as a pharmacy student, when he decided to pursue music as a career and moved to New York City. He came to prominence in 1964, playing and recording on Jackie McLean's Blue Note albums. In 1971, Tolliver and Stanley Cowell founded Strata-East Records, one of the pioneer artist-owned jazz record labels. Tolliver himself released many albums and collaborations on Strata.[1] Following a long hiatus, he reemerged in the late 2000s, releasing two albums arranged for big band. With Love was nominated in 2007 for a Grammy award for Best Large Jazz Ensemble.[2]

He would later describe his experience: "There was so much going on with the music. Like with bebop, we had a long period of just salivating on. There were all these different idioms within a genre, the avant-garde and free music, bebop still, and of course the music of John Coltrane and Miles. It was just a hell of a period. And then there was also the political scene going on...."[3]

This article uses material from the article Charles Tolliver from the free encyclopedia Wikipedia and it is licensed under the GNU Free Documentation License.

Bigger Plan Ira May
Update Required To play the media you will need to either update your browser to a recent version or update your Flash plugin.