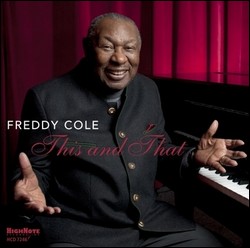 Lionel Frederick Cole (born October 15, 1931) is an American jazz singer and pianist, whose recording career has spanned over fifty years. He is leader of the Freddy Cole Quartet, which regularly tours the United States, Europe, the Far East and South America.

He is the brother of musicians Nat King Cole and Ike Cole, father of Lionel Cole and uncle of Natalie Cole.

Cole was born to Edward and Paulina Cole, and grew up in Chicago with siblings Eddie, Ike and Nat King Cole. He began playing piano at the age of six, and continued his musical education at the Roosevelt Institute in Chicago. He moved to New York in 1951, where he studied at the Juilliard School of Music, before completing a masters degree at the New England Conservatory of Music.

Following the moderate success of Whispering Grass in 1953[1] Cole spent several months on the road with Johnny Coles and Benny Golson as the Earl Bostic band. He went on to work with Grover Washington, Jr. and to record jingles for various companies, including Turner Classic Movies[2]

During the 1970s, Cole recorded several albums for European and English based labels. He was the subject of the 2006 documentary The Cole Nobody Knows. In June of that year, Cole was added to the Steinway Artist roster.[3]

Cole's influences included John Lewis, Oscar Peterson, Teddy Wilson and Billy Eckstine. When speaking of Eckstine, Cole recalled, "He was a fantastic entertainer. I learned so much from just watching and being around him."[5]

This article uses material from the article Freddy Cole from the free encyclopedia Wikipedia and it is licensed under the GNU Free Documentation License.

Still The Same Another Me
Update Required To play the media you will need to either update your browser to a recent version or update your Flash plugin.