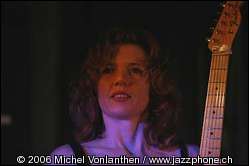 Born to a working-class family Foley grew up listing to her father play and sing Irish folk songs. After seeing James Cotton perform when she was 15, she made the lifelong decision to play blues guitar. At 16 she started playing professionally around Ottawa with local blues bands. By 21 she was living in Austin, Texas, and recording for legendary blues label Antones Records. Her first CD Young Girl Blues quickly established her unique talents as a blues guitarist and songwriter. Throughout the 90s she took to the road with her paisley Telecaster and honed her craft working/sharing the stage with such artists as BB King, Buddy Guy, Lucinda Williams and Tom Petty. In 1997 she moved back to Canada to raise her son. In 2000, her home country honored her with her first Juno Award (Canada's premier music awards): Best Blues Album for her CD Love Comin Down. Since 1999 she has received a record-setting 17 Maple Blues Awards, and 3 Trophées de blues in France . Sue also received a nomination for the prestigious W.C. Handy Award for best contemporary female artist in 2002.

Contributions to other albums

This article uses material from the article Sue Foley from the free encyclopedia Wikipedia and it is licensed under the GNU Free Documentation License.

Changing Ad-Rian feat. Andy Abraham
Update Required To play the media you will need to either update your browser to a recent version or update your Flash plugin.