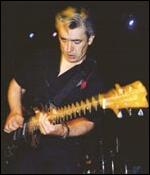 Christopher John Spedding (born Peter Robinson, 17 June 1944)[1] is an English musician, singer, guitarist, songwriter, multi-instrumentalist, composer, and record producer. In a career spanning more than 40 years, Spedding is best known for his studio session work. By the early 1970s, he had become one of the most sought-after session guitarists in England. Spedding has played on and produced many albums and singles. He has also been a member of eleven rock bands: The Battered Ornaments, Frank Ricotti Quartet, King Mob, Mike Batt and Friends, Necessaries, Nucleus, Ricky Norton, Sharks, Trigger, and The Wombles.

AllMusic has described Spedding as "one of the UK's most versatile session guitarists, [he] has had a long career on two continents that saw him tackle nearly every style of rock and roll, as well as sporadically attempting a solo career. The fact that he never quite broke through to stardom, except in his native England and parts of Europe, and in professional music circles, is more a result of bad timing and worse luck than any lack of talent or commitment on his part."[1]

Spedding pursued a solo career and released his debut album Songs Without Words in 1970. Since then, he has released fourteen studio albums, and two live albums. His solo albums have met no success, failing to chart anywhere, while his only single to chart was "Motor Bikin'".[2]

Chris Spedding was born in Staveley, Derbyshire, but was raised in Sheffield and Birmingham by adoptive parents Muriel and Jack Spedding, and renamed Christopher John Spedding.

Whilst still with the Battered Ornaments, which without the departing Pete Brown left Spedding as their frontman, he joined the Frank Ricotti Quartet, and played guitar on the album Our Point of View, released in July 1969.[3] He was also invited to play on Jack Bruce's first and third solo albums, Songs for a Tailor (1969) and Harmony Row (1971).[1]

Spedding then recorded his own instrumental album, Songs Without Words (1970) for Harvest Records, which was only released in Japan.[1]

During this time he was also playing jazz with Nucleus and recorded and toured with Mike Gibbs. He played guitar on the Pete Atkin / Clive James album Driving Through Mythical America.[4][5] He was a session player on Harry Nilsson's breakthrough album, Nilsson Schmilsson, recorded in London. In 1970 he played on the original recording of Jesus Christ Superstar[6], and in 1971 he also played on "Pieces of me" by Linda Hoyle and Coming from Reality by Sixto Rodriguez, who was later the subject of the 2012 documentary Searching for Sugar Man. During 1972–74 Spedding played a central role in Sharks, initially with ex-Free bassist Andy Fraser.[1] They recorded two albums and toured with Roxy Music. After that, he toured and recorded with John Cale. He also played with Roy Harper's occasional backing band Trigger, notably on 1975's HQ album. In 1972–76 he played in Mike Batt's novelty band The Wombles, and confirmed on the Marc Riley show on BBC 6Music that he performed on television in a Womble suit.

In 1975, Spedding had a Top 20 solo hit in the UK with "Motor Bikin'",[2] which he promoted with popular television appearances on Top of the Pops and Supersonic, dressed in leather motorcycling gear, with greased hair and backed by UK punk band The Vibrators.[7] When further hits failed to materialise, he subsequently became better known as a session guitarist, appearing and recording with Bryan Ferry, Roxy Music, Elton John, Brian Eno, Jack Bruce, Nick Mason, Art Garfunkel, Typically Tropical, Katie Melua, and Ginger Baker, amongst others. During the mid-1970s, he even took part in the Wombles' UK tour in full furry costume, whilst wielding his trademark Gibson Flying V.[1] His own album Chris Spedding (1975) was produced by Mickie Most. Spedding recorded a version of the American singer-songwriter Garland Jeffreys' song, "Wild in the Streets", on his own Hurt album. The song has since been covered by the Circle Jerks and is featured on Tony Hawk's American Wasteland.

He also was the producer of the Sex Pistols' first demos, which were recorded on 15 May 1976.[1] The three tracks recorded were "Problems", "No Feelings" and "Pretty Vacant"; there are persistent rumours that he played guitar and bass on their debut album, Never Mind the Bollocks, Here's the Sex Pistols, however guitarist Steve Jones denies this entirely.[8] The following year, Spedding featured extensively on the concept album Jeff Wayne's Musical Version of The War of the Worlds, issued in 1978.

Spedding moved to New York City, joined the Necessaries as a guitarist and songwriter, collaborated with drummer/percussionist David Van Tieghem, and worked extensively with Robert Gordon. Before long he was back in the UK and recorded another album of his own, I'm Not Like Everybody Else (1980).[1] The same year he appeared on Joan Armatrading's album Me Myself I, playing lead guitar on a number of tracks, including the chart-hit title track.[9] His live album, Friday the 13th was released in 1981.[1] In 1982 he played on Nina Hagen's seminal recording NunSexMonkRock, and over the next few years he continued his session work on such albums as Tom Waits' Rain Dogs, while periodically releasing solo material (Mean and Moody (1985), Enemy Within (1986) and Cafe Days (1990).[1]

He made an appearance in Paul McCartney's Give My Regards to Broad Street in 1984, playing guitar in a session with McCartney and his wife, Linda.[1] In the same year he played on Roger Daltrey's solo album Parting Should Be Painless. Spedding was producer of the first two albums by the Canadian rockabilly band, The Razorbacks, entitled Go to Town (1988) and Live a Little (1989). In 1995, he played on Willy DeVille's Big Easy Fantasy, and later that year, on his album Loup Garou.

On 31 October 2011 the 11 track CD King Mob album was released featuring Spedding on guitar, Glen Matlock on bass, Martin Chambers on drums, Sixteen on guitar and fronted by Stephen W. Parsons, aka Snips a former member of Sharks. Although both the album and live shows received positive reviews King Mob announced that they were disbanding in September 2012.

In June 2014, Spedding appeared as a special guest playing guitar with Bryan Ferry at the 2014 Glastonbury Festival held in Pilton, Somerset, United Kingdom. In 2016 he toured the US with Ferry.

This article uses material from the article Chris Spedding from the free encyclopedia Wikipedia and it is licensed under the GNU Free Documentation License.

Ordinary Man Ozzy Osbourne feat. Elton John
Update Required To play the media you will need to either update your browser to a recent version or update your Flash plugin.