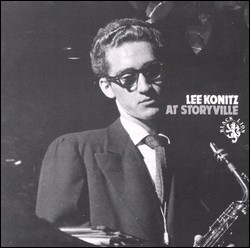 He has performed successfully in a wide range of jazz styles, including bebop, cool jazz, and avant-garde jazz. Konitz's association with the cool jazz movement of the 1940s and 1950s includes participation in Miles Davis's Birth of the Cool[1] sessions and his work with pianist Lennie Tristano.[2] He was notable during this era as one of relatively few alto saxophonists to retain a distinctive style when Charlie Parker exerted a massive influence.

Like other students of Tristano, Konitz was noted for improvising long, melodic lines with the rhythmic interest coming from odd accents, or odd note groupings suggestive of the imposition of one time signature over another. Other saxophonists were strongly influenced by Konitz, notably Paul Desmond and Art Pepper.

Konitz was born on October 13, 1927 in Chicago, Illinois to Jewish parents of Austrian and Russian descent. Aged 11, Konitz received his first instrument: a clarinet. However, he later dropped the instrument in favor of the tenor saxophone. He eventually moved from tenor to alto. His greatest influences at the time were the swing big bands, to whom he and his brother listened on the radio, specifically, Benny Goodman. Hearing Goodman on the radio is, in fact, what prodded him to ask for a clarinet. He recalls improvising on the saxophone before ever learning to play any standards.[3]

Konitz began his professional career in 1945 with the Teddy Powell band as a replacement for Charlie Ventura. A month later, the band parted ways. Between 1945 and 1947, he worked off and on with Jerry Wald. In 1946, he first met pianist Lennie Tristano, and the two worked together in a small cocktail bar. His next substantial work was done with Claude Thornhill, in 1947, with Gil Evans arranging and Gerry Mulligan as a composer, in most part.[4][5]

He participated with Miles Davis in a group that had a brief booking in September 1948 and another the following year, but recorded in 1949 and 1950 the sides collected on the Birth of the Cool album. The presence of Konitz and other white musicians in the group angered some black jazz players, many of whom were unemployed at the time, but Davis rebuffed their criticisms.[6] Konitz has stated he considered the group to belong to Gerry Mulligan. His debut as leader also came in 1949 with sides later collected on the album Subconscious-Lee. (Prestige, 1955).[7] He also turned down an opportunity to work with Goodman in 1949—a decision he is on record as regretting.[5] Parker lent him support on the day Konitz's child was being born in Seattle, Washington, while he was stuck in New York City. The two were actually good friends, and not the rivals some jazz critics once made them out to be.[3]

In the early 1950s, Konitz recorded and toured with Stan Kenton's orchestra, but he continued to record under his own name. In 1961, he recorded Motion with Elvin Jones on drums and Sonny Dallas on bass. This spontaneous session, widely regarded as a classic, consisted entirely of standards. The loose trio format aptly featured Konitz's unorthodox phrasing and chromaticism. In 1967, Konitz recorded The Lee Konitz Duets, a series of duets with various musicians. The duo configurations were often unusual for the period (saxophone and trombone, two saxophones). The recordings drew on very nearly the entire history of jazz, from Louis Armstrong's "Struttin' With Some Barbecue" with valve trombonist Marshall Brown to two completely free duos: one with a Duke Ellington associate, violinist Ray Nance, and one with guitarist Jim Hall.

Konitz contributed to the film score for Desperate Characters (1971). In 1981, he performed at the Woodstock Jazz Festival, which was held in celebration of the tenth anniversary of the Creative Music Studio.

Konitz has recorded or performed with, Dave Brubeck, Ornette Coleman, Charles Mingus, Attila Zoller, Gerry Mulligan, Elvin Jones, and several others. His latest recordings are a pair of trio dates with Brad Mehldau and Charlie Haden, released on Blue Note as well a live album recorded in 2009 at Birdland and released by ECM in 2011 featuring the same lineup with the addition of drummer Paul Motian. Konitz has become more experimental as he has grown older, and has released a number of free and avant-garde jazz albums, playing alongside many far younger musicians. His album with Grace Kelly was given 4 1/2 stars by Michael Jackson in Down Beat magazine.[8] Konitz has released albums on contemporary free jazz/improv labels such as hatART, Soul Note, Omnitone and the aforementioned ECM.

He has also had problems with his heart which he has received surgery for in the past.[9] He was scheduled to appear at Melbourne's Recital Centre as a key attraction of the 2011 MelbourooInternational Jazz Festival. However he fell ill causing the last minute cancellation of the performance.

In August 2012 Konitz played to sell-out crowds at the Blue Note in Greenwich Village as part of Enfants Terribles, a collaboration with Bill Frisell, Gary Peacock and Joey Baron. Just days after his 87th birthday in 2014, Konitz played three nights at Cafe Stritch in San Jose, California with the Jeff Denson Trio, improvising on the old standards he favors.[10]

This article uses material from the article Lee Konitz from the free encyclopedia Wikipedia and it is licensed under the GNU Free Documentation License.

Little Rose Gigi Moto
Update Required To play the media you will need to either update your browser to a recent version or update your Flash plugin.