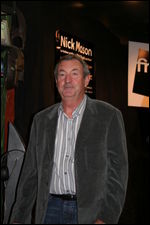 Mason is the only Pink Floyd member to be featured on every one of their albums, and the only constant member of the band since its formation in 1965. It is estimated that as of 2010, the group have sold over 250 million records worldwide,[1][2] including 75 million units sold in the United States. Despite solely writing only a few Pink Floyd songs, Mason has co-written some of Pink Floyd's most popular compositions such as "Echoes" and "Time".

He competes in motor racing events, such as the 24 Hours of Le Mans.[3]

On 26 November 2012, Mason received an Honorary Doctor of Letters from the University of Westminster at the presentation ceremony of the School of Architecture and Built Environment (he had studied architecture at the University's predecessor, Regent Street Polytechnic, 1962–1967).[4]

The son of documentary film maker Bill Mason, he was born in Birmingham but brought up in Hampstead, London (many online biographies mistakenly cite the street address Downshire Hill – sometimes as "the Downshire Hills" – as a district of Birmingham), attending the Hall School, Hampstead, and afterwards studying at Frensham Heights School, near Farnham, Surrey. He later studied at the Regent Street Polytechnic (now the University of Westminster), where he teamed up with Roger Waters, Bob Klose and Richard Wright in 1964 to form Pink Floyd's predecessor, Sigma 6.

Mason has been the drummer on every Pink Floyd album.[5]

The only Pink Floyd songs whose composition is credited solely to Mason are "The Grand Vizier's Garden Party Parts 1–3" (from Ummagumma) and "Speak to Me" (from The Dark Side of the Moon).[5] The one-off song by the band titled "Nick's Boogie" was named after him.[5]

The only times Mason's voice has been included on Pink Floyd's albums are "Corporal Clegg", the single spoken line in "One of These Days" and spoken parts of "Signs of Life" and "Learning to Fly" (the latter taken from an actual recording of Mason's first solo flight) from A Momentary Lapse of Reason.[5] He does, however, sing lead vocals on two unreleased but heavily bootlegged tracks, "Scream Thy Last Scream" (1967), penned by original leader Syd Barrett and "The Merry Xmas Song" (1975–76). In live performances of the song "Sheep", he did the spoken section.[5]

Despite legal conflicts over ownership of the name 'Pink Floyd', which began when Waters left the group in 1985 and lasted roughly seven years, Waters and Nick Mason are now on good terms.[5] Mason joined Waters on the last two nights of his 2002 world tour to play drums on the Pink Floyd song "Set the Controls for the Heart of the Sun", and he also played drums on some concerts of Waters' European tour in 2006, and during performances in Los Angeles and New York City in the United States.

In July 2005, Mason, Gilmour, Wright, and Waters played together on stage for the first time in 24 years.[5] A four-song set was played at the Live 8 concert in London.[5] Mason also joined Gilmour and Wright for the encore during Gilmour's show at the Royal Albert Hall, London, on 31 May 2006, reuniting the post-Waters Pink Floyd. Mason has also claimed to be the link between Gilmour and Waters, and believes the band will play live again, mentioning the possibility of "playing again for a charitable cause" or even "a tour" in various interviews in the last few years. He also stated in 2006 that Pink Floyd had not officially disbanded yet, but with the death of Wright in 2008, the band effectively came to an end as confirmed by Gilmour.[6] In spite of this, Mason has continued to join Waters onstage on occasion. On 12 May 2007, Mason joined Waters again on stage at Earls Court to play The Dark Side of the Moon. Again, on 12 May 2011, Mason was featured (along with David Gilmour) on the encore "Outside the Wall" at a concert by Waters, who was performing The Wall in its entirety (Gilmour also performed on "Comfortably Numb" that night).

Unlike the other members of Pink Floyd, Mason has rarely played an instrument other than his drum kit or large array of percussion instruments, although he has utilised tapes and contributed sound effects to many Pink Floyd albums. He has only ever played non-percussive instruments on "The Grand Vizier's Garden Party", his personal composition from Ummagumma, where he used a mellotron to play brief melodies and create ambient noises, on "Jugband Blues", where he played kazoo, and on live versions of "Outside the Wall", where he played acoustic guitar along with the rest of the band. However, on the Profiles album Mason released with Rick Fenn in 1985, he is also credited with keyboards.[7] He can be seen playing a vibraphone in the promo video for "Lie for a Lie", but it is unknown if he actually played on the recording. Mason has also said that he took some failed piano and violin lessons as a child before taking up drums.

Mason has occasionally worked with other musicians, notably as a drummer and producer for Steve Hillage, Robert Wyatt (with whom he appeared on Top of the Pops[5]), The Damned and Gong.[7] He also drummed for Michael Mantler.[7]

Mason's book, Inside Out: A Personal History of Pink Floyd, was published in the UK in October 2004.[5] It is also available, abridged, as a 3-CD audio book, read by Mason.[5] An updated edition was published, in paperback, in 2011.

He performed in the closing ceremony of the 2012 Olympic Games on 12 August 2012. He produced and played on the charity single "Save the Children (Look Into Your Heart)", which also featured Beverley Knight, Mick Jagger and Ronnie Wood and which was released in May 2015 in aid of Save the Children's Nepal Earthquake Appeal.[8]

Influenced by jazz and big band music, Mason embraced acoustic drums (both single and double headed), tuned percussion, electronic drums and Rototoms, melding all of these into a melodic whole. His snare drum sound shifted from harsh demarcation of beats 2 and 4 ("Careful with that Axe, Eugene") to a fatter and gentler timbre ("Echoes") — a change that reflected growing studio chops.[9] His style was gentler and more laid back than that of other progressive rock drummers of the time. Mason soloed on a few Pink Floyd compositions including "Nick's Boogie", "A Saucerful of Secrets", "The Grand Vizier's Garden Party", "Up The Khyber", "Skins", and "Time". Due to the dynamic live performances of Pink Floyd, Mason's style was more energetic and complex live, and can be heard on such albums as Ummagumma and Live at Pompeii. He used Premier drums in the 1960s and occasionally in the 1970s (mainly on recordings up to Wish You Were Here). After that, he used Ludwig drums from 1970 until 1992. He currently uses Drum Workshop (DW) drums, pedals and hardware. His kit is a DW double bass kit with the Dark Side of the Moon logo on the drums. He has also used Paiste cymbals during his entire career with Pink Floyd and currently uses a mixture of Paiste Traditional, Signature and 2002 cymbals. He also endorses Remo drumheads, Latin Percussion and Pro-Mark sticks.

Mason's first marriage was to Lindy Rutter, with whom he had two daughters Chloe and Holly. Lindy was an accomplished woodwind player; she played flute on "The Grand Vizier's Garden Party" from Ummagumma. The couple divorced in the late 1980s and Mason is now married to his second wife, Nettie, most famous for her adjudication role on the second series of Treasure Hunt in 1984. They have two sons Cary and Guy and live in Hampstead, London. Since 1995 they have also owned Middlewick House, the Grade II listed former home of Andrew and Camilla Parker Bowles, in the Wiltshire town of Corsham. Holly is married to sports car racer Marino Franchitti, the younger brother of multiple IndyCar champion Dario Franchitti.[10]

As Pink Floyd's recording and touring schedule grew more sporadic, Mason was left with more time to pursue his favourite hobby: motor racing. This interest was documented in the 1986 short film Life Could Be a Dream.[11] He owns (through his company Ten Tenths) and races several classic cars, and has competed successfully at the 24 Hours of Le Mans. His collection has been a subject of his 1998 book, Into the Red, in which he documents his experience with his cars, along with some histories.[12] He is also a qualified pilot, and flies an Aerospatiale AS 350 Squirrel helicopter in specially painted colours.[13]

Mason was invited by Ferrari to purchase one of their 400 Enzos, which he let Jeremy Clarkson borrow for reviewing purposes on the BBC motoring programme Top Gear. Mason agreed, on the sole condition that throughout the review, Clarkson promoted the release of the book Inside Out: A Personal History of Pink Floyd. This led to Clarkson using Pink Floyd album titles in his description of the Enzo and The Stig driving round the track with "Another Brick in the Wall" playing (despite the fact that the Enzo does not come equipped with a stereo). Mason says that his favourite car of all time is the Ferrari 250 GTO, and owns one of the 39 built (valued between £16m and £30m).

Mason is set to appear on the current series of The Grand Tour. He will compete against Stewart Copeland for the title of "fastest rock drummer" in the show's Celebrity Face Off segment.[14]

In common with Roger Waters, Mason has played concerts to raise funds for the Countryside Alliance, a group which campaigned against the ban on fox hunting with the Hunting Act 2004.[16] In 2007 they both performed at Highclere Castle in Hampshire in support of the group.[17]

He is a board member and co-chairman of the Featured Artists' Coalition.[18][19] As a spokesman for the organisation, Mason has voiced his support for musicians' rights and offered advice to younger artists in a rapidly changing music industry.[20]

Mason has joined Roger Waters in expressing support for the Boycott, Divestment and Sanctions campaign against Israel over the Israeli-Palestinian conflict and urged the Rolling Stones not to play in Israel in 2014.[21]

This article uses material from the article Nick Mason from the free encyclopedia Wikipedia and it is licensed under the GNU Free Documentation License.

A Love So Beautiful Roy Orbison
Update Required To play the media you will need to either update your browser to a recent version or update your Flash plugin.