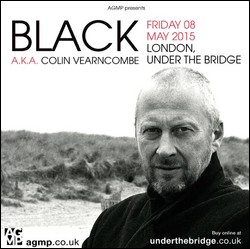 Black is the pseudonym for English singer-songwriter Colin Vearncombe (born 26 May 1962, Liverpool, England), who briefly enjoyed mainstream success in the late 1980s. William Ruhlmann of Allmusic described Verncombe as a "smoky-voiced singer/songwriter, whose sophisticated jazz-pop songs and dramatic vocal delivery place him somewhere between Bryan Ferry and Morrissey."[1]

Black's first release was "Human Features" on Rox Records in 1981. This was followed by another independent release in 1982 "More than the Sun", after which he was signed by WEA Records.

In 1982, Black played with the Thompson Twins on their "Quick Step and Side Kick" tour. The live sound of synth/percussion/guitar and the use of reel-to-reel tapes got him noticed.

The first release for WEA was "Hey Presto" (1984), which got him noticed outside the UK: the video for this song featured on the satellite music channel Music Box, and the single was released in Australia. The second WEA single was a re-recording of "More than the Sun". After this, Black was dropped from the record label.

1985 was a gloomy year for Vearncombe, causing him to write the ironically entitled minor key song "Wonderful Life". Released independently through Ugly Man Records at first, this track got Black noticed by A&M Records who signed Vearncombe and launched his international career. At first, the single "Everything's Coming Up Roses" flopped, but the follow-up, "Sweetest Smile" became a UK top 10 hit. The third single, a re-release of "Wonderful Life", was a massive hit worldwide. The album of the same name, released in 1987, had similar success, reaping commercial and critical acclaim.

Black then went on to sell over two million records worldwide with Comedy (1988) and Black (1991). In the meantime, Vearncombe married Swedish singer Camilla Griehsel, formerly from the band One 2 Many. Disillusioned with having to deal with a big record company, Vearncombe founded the independent label Nero Schwarz (which is the word "black" in Italian and in German, respectively), and released one album Are We Having Fun Yet? (1993).

After a prolonged hiatus, Vearncombe returned in 1999 to release a string of recordings under his own name.

Vearncombe returned to the name "Black" to release a new recording entitled Between Two Churches in November 2005. On this album he included a song mocking the success of his hit "Wonderful life", where he poignantly re-asked the question, "Are you having a wonderful life?".

2009 saw two album releases. The Given was issued on 4 July, initially available as a free download under Vearncombe's name; and Water On Stone on 17 November, the first Black studio album in four years.

This article uses material from the article Black (singer) from the free encyclopedia Wikipedia and it is licensed under the GNU Free Documentation License.

Heartblind Nick Mellow
Update Required To play the media you will need to either update your browser to a recent version or update your Flash plugin.