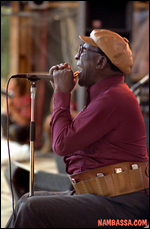 Saunders Terrell (24 October 1911 11 March 1986[1]), better known as Sonny Terry, was a blind American Piedmont blues musician.[2] He was widely known for his energetic blues harmonica style, which frequently included vocal whoops and hollers, and imitations of trains and fox hunts.

Terry was born in Greensboro, GA.[3] His father, a farmer, taught him to play basic blues harp as a youth. He sustained injuries to his eyes and went blind by the time he was 16, which prevented him from doing farm work himself,[1] and in order to earn a living Terry was forced to play music. He began playing in Shelby, North Carolina. After his father died, he began playing in the trio of Piedmont blues-style guitarist Blind Boy Fuller. When Fuller died in 1941, he established a long-standing musical relationship with Brownie McGhee, and the pair recorded numerous songs together. The duo became well-known among white audiences, as they joined the growing folk movement of the 1950s and 1960s. This included collaborations with Styve Homnick, Woody Guthrie and Moses Asch, producing Folkways Records (now Smithsonian/Folkways) classic recordings.

In 1938 Terry was invited to play at Carnegie Hall for the first From Spirituals to Swing concert,[1] and later that year he recorded for the Library of Congress. In 1940 Terry recorded his first commercial sides. Some of his most famous works include "Old Jabo" a song about a man bitten by a snake and "Lost John" in this he demonstrates his amazing breath control .

Despite their fame as "pure" folk artists, in the 1940s, Terry and McGhee fronted a jump blues combo with honking saxophone and rolling piano that was variously billed as Brownie McGhee and his Jook House Rockers or Sonny Terry and his Buckshot Five.

Terry was also in the 1947 original cast of the Broadway musical comedy, Finian's Rainbow.[4] He also appeared in The Colour Purple directed by Steven Spielberg. With Brownie McGhee, he appeared in the 1979 Steve Martin comedy The Jerk. Terry collaborated with Ry Cooder on "Walkin' Away Blues" as well as a cover of Robert Johnson's "Crossroad Blues" for the 1986 film Crossroads.

Terry died from natural causes at Mineola, New York, in March 1986, three days before Crossroads was released in theaters.[5] He was inducted into the Blues Hall of Fame that same year.[1]

Terry's rendition of the traditional song "Fox Chase", was used by the experimental filmmaker Len Lye as the soundtrack for his short film, Color Cry (1952). "Old Lost John" was used by Werner Herzog twice: at the conclusion of his 1977 feature film Stroszek and also during shooting scene in Bad Lieutenant. Port of Call: New Orleans (2009). More recently Terry's track "Whoopin' The Blues" was used for an EON Wind Farm brand commercial. It also appeared in the film 24 Hour Party People (Winterbottom, 2002).

Sonny Terry's harmonica is sampled in the song "Love is Eternal Sacred Light" on Paul Simon's album So Beautiful or So What.

This article uses material from the article Sonny Terry from the free encyclopedia Wikipedia and it is licensed under the GNU Free Documentation License.