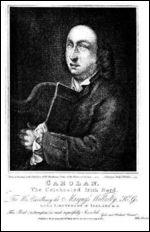 born in 1670 in County Meath, Ireland

Turlough Carolan, also known as Turlough O'Carolan,[1] (Irish: Toirdhealbhach Ó Cearbhalláin; Irish pronunciation: [telx o carulan]) (1670 25 March 1738) was a blind, early Irish harper, composer and singer whose great fame is due to his gift for melodic composition. He was the last great Irish harper-composer and is considered by many to be Ireland's national composer. Harpers in the old Irish tradition were still living as late as 1792, as ten, including Arthur O'Neill, Patrick Quin and Denis O'Hampsey, showed up at the Belfast Harp Festival, but there is no proof of any of these being composers. Some of Carolan's own compositions show influence from the style of continental classical music, whereas others such as Carolan's Farewell to Music reflect a much older style of "Gaelic Harping".

O'Carolan was born in -34 near Nobber, County Meath, but in 1684 he moved with his family, to Ballyfarnon, County Roscommon, where his father took a job with the MacDermottRoe family of Alderford House. Mrs. MacDermottRoe gave him an addiction, and he showed talent in poetry. After being blinded by smallpox, at the age of eighteen, Carolan was apprenticed by Mrs MacDermott Roe to a good harper. At the age of twenty-one, being given a horse and a guide, he set out to travel Ireland and compose songs for patrons. For almost fifty years, Carolan journeyed from one end of the country to the other, composing and performing his tunes.

In 1720, O' Carolan married Mary Maguire. He was then 50 years of age. Their first family home was a cottage on a parcel of land near the town of Mohill in Co Leitrim, where they settled. They had seven children, six daughters and a son. In 1733 Mary died.

A bronze monument by sculptor Oisin Kelly depicting Turlough Carolan playing his harp, was erected on a plinth at the Market Square, Mohill, on 10 August 1986, and was unveiled by Patrick Hillery, President of Ireland.

Carolan composed both songs and instrumental harp music. Except for one song with an English text, all of his songs are in Irish. Most of his songs were dedicated to and about specific individuals. Many songs do not survive whole; what lyrics survive have only been published in part. His lyrics are rarely learned, whereas many of his tunes are widely performed and appreciated.

Carolan's musical style shows a mix of traditional and classical elements. He typically composed the tune firstas he rode from place to placethen added words later. Many of the tunes attributed to Carolan are older traditional melodies that he improved or lengthened. He wrote many "planxties" (tributes) in honor of some person. It is said that weddings and funerals were often delayed until he could arrive to perform.

His music was first published in Neale's A Collection of the Most Celebrated Irish Tunes ... in Dublin, c.1726. At least 220 tunes which survive to this day are attributed to him, though most were not published or even written down in his lifetime; they survived in the repertories of fiddlers, pipers and the last of the old Irish harpers and were collected and published piecemeal in the late 18th and 19th centuries.

Only in 1958 was his entire repertoire published in one edition by Donal O'Sullivan, and even then few lyrics were given and some of the tunes were edited to make them fit the treble register.

A definitive and comprehensive edition of harp settings matched with the words of the songs has yet to be produced although a number of song settings appeared in The Bunting Collection of Irish Folk Music and Song by Donal O'Sullivan.

Some of his compositions are performed by many popular Irish musicians, such as Planxty, The Chieftains and The Dubliners. In addition, Carolan's Concerto has been used as a neutral Slow March by the Foot Guards of the British Army during the ceremony of Trooping the Colour.

This article uses material from the article Turlough Carolan from the free encyclopedia Wikipedia and it is licensed under the GNU Free Documentation License.

Can't Stop Me Now Rod Stewart
Update Required To play the media you will need to either update your browser to a recent version or update your Flash plugin.