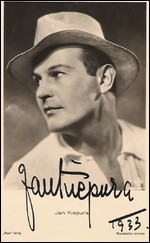 Jan Kiepura was born in Sosnowiec, Poland, the son of Miriam (née Neuman), a former professional singer, and Franciszek Kiepura, a baker and grocery owner.[1][2] His mother was Jewish.[3] He had a brother, Wadysaw. During 1916-1920, he attended the Junior School in Sosnowiec where he graduated from high school. In 1921 he studied law at the University of Warsaw. He learned singing from Wacaw Brzeziski and Tadeusz Leliwa. In 1923 he performed his first concert in the Sphinx cinema in Sosnowiec. In 1924, Jan Kiepura was admitted by Emil Mynarski to the local choir. He played the role of Góral in Moniuszko's opera Halka. He also took part in a production of Gounod's Faust Faust in the Polish city of Lwow (now in the Ukraine).

In 1926, Jan Kiepura left Poland for an international career in Germany, Hungary, France, and England. When he returned to Poland, with the money he had earned from his performances, he built the well-known hotel Patria in the Polish border town of Krynica-Zdrój, which cost him about US$3 million. Some Polish movies were made there. Kiepura played in twelve Polish musicals, including O czym si nie myli (1926),[4] Die Singende Stadt (Neapol, piewajce miasto) (1930),[5] Tout Pour L'amour (Zdoby ci musz) (1933),[6] and Mon coeur t'appelle (1934).

Kiepura's return to Warsaw in 1934 caused a sensation in the Polish capital, and his musical shows were received with huge enthusiasm. Apart from his performances in concert halls, he also sang to a crowd gathered under the balcony of the Warsaw hotel "Bristol". He also sang while standing on his car's roof, or from a carriage's window, and also spoke to the audience. However, he was not a frequent guest in Poland. He signed contracts with Convert Garden in London, Opéra Comique in Paris and National Opera in Berlin. Kiepura also started a film career, working with Berlin's UFA and then with the Motion Picture Industry in Hollywood. He played in many films, of which the most famous are: The Singing City, The Song of Night, Ich liebe alle Frauen, The Charm of La Boheme, Das Land des Lächelns.

On October 31, 1936, Kiepura married the Hungarian-born lyric soprano Marta Eggerth (1912-2013). The two often sang together in operettas, in concerts, on records, and in films until his death. In 1937 Kiepura and Eggerth were forced to flee Europe due to the rise of German Nazism and the onset of World War II. They emigrated to the United States.

He died at the age of 64 in New York and was buried in Powzki Cemetery, Warsaw.

This article uses material from the article Jan Kiepura from the free encyclopedia Wikipedia and it is licensed under the GNU Free Documentation License.

Look Closer BabsGinger
Update Required To play the media you will need to either update your browser to a recent version or update your Flash plugin.