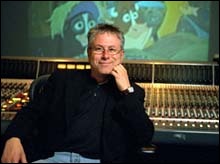 Alan Menken (born July 22, 1949) is an American musical theatre and film composer and pianist. Menken has collaborated with lyricists including Howard Ashman, Tim Rice and Stephen Schwartz. For his work he has won eight Academy Awards as well as ten additional nominations.

Menken was born into a Jewish family in New Rochelle, New York, the son of Judith and Norman Menken, a dentist.[1] He developed an interest in music at an early age, studying piano and violin. He went to New Rochelle High School in New Rochelle, New York. He attended New York University as a pre-med student, but later changed his focus to music. After college, he attended the BMI Lehman Engel Musical Theater Workshop. He performed frequently in local clubs and worked as a composer of jingles and songs and as an accompanist.

In the late 1970s, Menken wrote several shows that were successfully showcased, but were not produced. Menken's first major professional work was with Ashman for the Off-Broadway 1979 WPA Theatre production of the play God Bless You, Mr. Rosewater, an adaptation of a Kurt Vonnegut novel. This was well received, but three years later, he achieved greater success with the 1982 Off-Broadway musical Little Shop of Horrors, again with Ashman, for which he earned a Drama Desk Award nomination. Little Shop was adapted for a successful motion picture and later a Broadway run.

In 1983, Menken received the BMI Career Achievement Award for his body of work for musical theater, including Little Shop of Horrors, God Bless You, Mr. Rosewater, Real Life Funnies, Atina: Evil Queen of the Galaxy (produced in workshop as Battle of the Giants), Patch, Patch, Patch, and contributions to numerous revues including Personals and Diamonds. In 1987, a musical adaptation of The Apprenticeship of Duddy Kravitz, with lyrics by David Spencer, was produced in Philadelphia. In 1992, the WPA Theatre produced Menken's Weird Romance, also with lyrics also by Spencer. Menken's 1994 musical based on the Charles Dickens classic A Christmas Carol, with lyrics by Lynn Ahrens and book by Mike Ockrent, debuted at Madison Square Garden's Paramount Theater. The show proved successful and is becoming an annual New York holiday event. Menken received both Tony Award and Drama Desk Award nominations for the music to the stage musical version of Beauty and the Beast which opened on Broadway in 1994.

Menken is best known, however, for his work over the past two decades with Walt Disney Pictures scoring numerous films, including Disney animated classics The Little Mermaid, Beauty and the Beast, Aladdin, Pocahontas, The Hunchback of Notre Dame, Hercules and Home on the Range, live-action Newsies, and most recently, its 2007 live-action fairy tale Enchanted. Menken has received dual Academy Awards for Best Score and Best Song on four of these projects. His eight awards overall from only eleven feature films scored give him one of the highest Oscar-to-film ratios of all film composers.

Menken's Sister Act the Musical was produced in 2006. A musical version of The Little Mermaid opened on Broadway in January 2008. Menken and his wife, Janis, a former ballet dancer, reside in upstate New York with their two children, Anna and Nora.

This article uses material from the article Alan Menken from the free encyclopedia Wikipedia and it is licensed under the GNU Free Documentation License.

Every Time You Cry John Farnham & Human Nature
Update Required To play the media you will need to either update your browser to a recent version or update your Flash plugin.