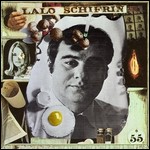 Boris Claudio "Lalo" Schifrin (born June 21, 1932)[1] is an Argentine pianist, composer, arranger and conductor. He is best known for his large body of film and TV scores since the 1950s, including the "Theme from Mission: Impossible" and Enter the Dragon. He has received five Grammy Awards and six Oscar nominations. Associated with the jazz music genre, Schifrin is also noted for his collaborations with Clint Eastwood from the late 1960s to the 1980s, particularly the Dirty Harry films.

Schifrin was born in Buenos Aires.[2] His father, Luis Schifrin, led the second violin section of the orchestra at the Teatro Colón for three decades.[1] At the age of six, Schifrin began a six-year course of study on piano with Enrique Barenboim, the father of pianist and conductor Daniel Barenboim. At age 16, Schifrin began studying piano with the Greek-Russian expatriate Andreas Karalis, former head of the Kiev Conservatory, and harmony with Argentine composer Juan Carlos Paz. During this time, Schifrin also became interested in jazz.

Although Schifrin studied sociology and law at the University of Buenos Aires, music captured his attention.[1] At age 20, he successfully applied for a scholarship to the Paris Conservatoire. At night, he played jazz in the Paris clubs. In 1955, Schifrin played piano with Argentinian bandoneon giant Ástor Piazzolla, and represented his country at the International Jazz Festival in Paris.

After returning home to Argentina in his twenties, Schifrin formed a jazz orchestra, a 16-piece band that became part of a popular weekly variety show on Buenos Aires TV. Schifrin also began accepting other film, television and radio assignments. In 1956, Schifrin met Dizzy Gillespie and offered to write an extended work for Gillespie's big band. Schifrin completed the work, Gillespiana, in 1958[1] (it was recorded in 1960). Later that year, Schifrin began working as an arranger for Xavier Cugat's popular Latin dance orchestra.

While in New York in 1960, Schifrin again met Gillespie, who had by this time disbanded his big band for financial reasons. Gillespie invited Schifrin to fill the vacant piano chair in his quintet. Schifrin immediately accepted and moved to New York City. Schifrin wrote a second extended composition for Gillespie, The New Continent, which was recorded in 1962.

On 26 May 1963, he recorded an album, Buenos Aires Blues, with Duke Ellington’s alto saxophonist, Johnny Hodges. Schifrin wrote two compositions for the album; Dreary Blues and the title track B. A. Blues. In the same year MGM, which had Schifrin under contract, offered the composer his first Hollywood film assignment with the African adventure Rhino!.[1] Schifrin moved to Hollywood late that year.

One of Schifrin's most recognizable and enduring compositions is the theme music for the long-running TV series Mission: Impossible. It is a distinctive tune written in the uncommon 5/4 time signature. Similarly, Schifrin's theme for the hugely successful Mannix private eye TV show was composed a year later in a 3/4 waltz time; Schifrin composed several other jazzy and bluesy numbers over the years as additional incidental music for the show.

Schifrin's "Tar Sequence" from his Cool Hand Luke score (also written in 5/4) was the longtime theme for the Eyewitness News broadcasts on New York station WABC-TV and other ABC affiliates, as well as National Nine News in Australia. CBS Television used part of the theme of his St. Ives soundtrack for its golf broadcasts in the 1970s and early 1980s.

Schifrin's score for the 1968 film Coogan's Bluff was the beginning of a long association with Clint Eastwood and director Don Siegel. Schifrin's strong jazz blues riffs were evident in Dirty Harry.

Schifrin's working score for 1973's The Exorcist was rejected by the film's director, William Friedkin. Schifrin had written six minutes of difficult and heavy music for the initial film trailer, but audiences were reportedly frightened by the combination of sights and sounds. As reported by Schifrin in an interview, Warner Bros. executives told Friedkin to instruct Schifrin to tone it down with softer music, but Friedkin did not relay the message. Schifrin also said that working on the film was one of the most unpleasant experiences in his life.[3]

In 1976 he released a single called "Jaws" on CTI (Creed Taylor Incorporated) records. This was the theme from the Universal Picture "Jaws" and reached number 14 in the UK chart and ran for nine weeks.

In the 1990s, he wrote many of the arrangements for the Three Tenors concerts.

In the 1998 film Tango, Schifrin returned to the tango music, with which he had grown familiar while working as Ástor Piazzolla's pianist in the mid-1950s. He brought traditional tango songs to the film, as well as introducing compositions of his own, in which tango is fused with jazz elements.[4]

Schifrin made a cameo appearance in Red Dragon (2002) as an orchestra conductor.

He is also widely sampled in hip-hop and trip-hop songs, such as Heltah Skeltah's "Prowl" or Portishead's "Sour Times". Both songs sample Schifrin's "Danube Incident", one of many themes he composed for specific episodes of the Mission: Impossible TV series.

In 2010, a fictionalised account of Lalo Schifrin's creation of the "Theme from Mission: Impossible" tune was featured in a Lipton TV commercial aired in a number of countries around the world.[6]

Lalo Schifrin has won five Grammy Awards (four Grammy Awards and one Latin Grammy), with twenty-two nominations, one Cable ACE Award, one Emmy Award, and received six Academy Award nominations. He has a star on the Hollywood Walk of Fame. In 2016 it was announced that his Mission: Impossible theme will be inducted into the GRAMMY Hall of Fame.[7]

This article uses material from the article Lalo Schifrin from the free encyclopedia Wikipedia and it is licensed under the GNU Free Documentation License.

Glass Train Redwood
Update Required To play the media you will need to either update your browser to a recent version or update your Flash plugin.