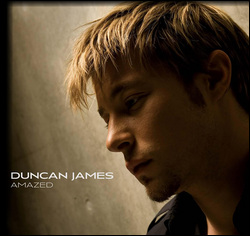 Duncan James (born Duncan Matthew James Inglis; 7 April 1978)[1] is an English singer, actor and television presenter. He is best known as a member of the boy band Blue from 2000 to 2005 and again from 2009 following their reformation. He is also known for playing Ryan Knight in Hollyoaks.

James was born in Salisbury, Wiltshire.[1] He grew up an only child in Dorset and was raised primarily by his mother and grandparents after his father abandoned his mother before he was born.[2] He was raised a "strict Catholic"[3][4][5] and educated at Dumpton School (where his grandfather worked as a music teacher),[6] Milldown School (Blandford Forum), Corfe Hills School (Broadstone), and Sidmouth College (East Devon). At the age of 15 he played Puck in A Midsummer Night's Dream. He played Dr Watson in Sherlock Holmes for Sidmouth Youth Theatre. James also worked for Haven Holidays as a Havenmate on the Isle of Wight and at West Bay in Dorset.

James, along with Antony Costa, convinced Lee Ryan and Simon Webbe in early 2000 to form the group Blue.[7] Blue's R&B-influenced pop allowed the group to achieve commercial success in the United Kingdom and many other countries, including Ireland, Portugal, Belgium, Italy, France, Australia and New Zealand. The band released their debut single "All Rise" in May 2001 and it reached No. 4 on the UK Singles Chart. Their follow up single, "Too Close", was released in August 2001 peaking at No. 1 on the UK Singles Chart. They went on to achieve a second number one in November with the ballad "If You Come Back". The album All Rise was released in time for Christmas and reached number one on the UK Albums Chart, eventually selling in excess of 1.8 million albums in the UK. The final single from the album, "Fly By II", reached No. 6 in March 2002.

A compilation album, Best of Blue, followed in July 2005; this included three tracks only previously performed in Japan: "The Gift", "It's Alright" and "Elements". By the indication of the album booklet, a live version of "Lonely This Christmas" from CD:UK was intended to be track seven on the album; however, this was removed from the track listing for unknown reasons. The album was available in several European countries, as well as Japan, Thailand[9] and China; however it was a commercial failure, and failed to chart anywhere. The album was not released in the UK, despite copies being widely available.

James returned to the music scene in May 2006 with his solo single "Sooner or Later", releasing the video in early May and planning to release the single commercially on 5 June 2006. The video reached No. 2 on The Box and No. 5 on The Hits. However, the single was no commercial success and entered the British charts at No. 35, before slipping down to No. 72 in its second week. "Can't Stop a River" was James's next single. Released on 21 August 2006, the track would only reach No. 59 in the UK and No. 97 in Ireland. In continental Europe, where "Can't Stop a River" was released a day earlier than in the UK, it similarly proved unpopular, dropping out of the singles charts in many countries such as France, Turkey, Germany, and Belgium. James' album also fell short, selling less than 1,000 copies in the UK in its first week (and failing to reach the Top 50). The album sold a total of 412,350 copies around the world.

Although his debut album did not do as well as hoped (except in Italy, where it reached No. 2 on the chart and was certified as platinum for shipments of 80,000 copies), on 2 February 2007, music channel B4 premièred the video for "Amazed", his new single which was scheduled to be released 12 March 2007. However, there was once again a lack of interest. The release was cancelled and James was dropped from his recording contract. He has since announced he has quit his solo career. In 2007 he appeared in the West End production of Chicago.[10] He completed ten more weeks in Chicago from 10 December 2007 until 9 February 2008.[11] He appeared in an episode of The Bill entitled "The Morning After", which aired on 1 January 2009. It was confirmed in February 2009 that James had been selected to replace Denise Van Outen as presenter of Grease: the School Musical, the sequel to Hairspray: The School Musical. Filming commenced in early 2009.

In May 2009 James announced the UK's voting in the Eurovision Song Contest. He presented Hannah-Oke on Disney Channel UK, a singing dancing contest based on the popular Disney TV series Hannah Montana. He also appeared on Celebrity Are You Smarter Than A 10 Year Old? and raised £10,000 for his charities. In 2006, James appeared with the other members of the boyband Blue on 26 June episode of Ministry of Mayhem, where James and the other band members were all hypnotised by UK stage hypnotist David Days.[12]

James has worked occasionally as a television presenter, having presented the 95.8 Capital FM's Party in the Park for the Prince's Trust (2003 and 2004), and ITV2's coverage of the TV series Soapstar Superstar, along with Jayne Middlemiss. His other presenting work includes Pop City Live, Variety Club Showbusiness Awards 2004, T4 Movie Special: Spider-Man 2, Record of the Year: Downloaded and GMTV's Entertainment Today.

He took part on ITV1's Dancing on Ice in 2007, when he made it to the grand final alongside rugby player Kyran Bracken and actress Clare Buckfield. He came third in the contest, although was unable to perform his Bolero performance. In 2007 James played himself in the pilot episode of Plus One, which was part of Channel 4's Comedy Showcase. A full series was broadcast in 2009, in which he played a broad caricature of himself called "Duncan From Blue". He made an appearance on a new show for Sky One, Guinness World Records Smashed, performing with Festival4Stars contestants.[13] It aired in November 2008.[14] In 2008 he became an Ambassador of Festival4Stars talent competition after he judged a national final.[13] James was cast as one of the leads in the musical Legally Blonde (adapted from the film Legally Blonde) as it transferred from Broadway to London's West End in December 2009.[15] He played opposite Sheridan Smith as Elle, and Aoife Mulholland as Brooke.[16] In December 2009, James appeared as Warner Huntington III in the West End production of Legally Blonde.[17] He appeared as a celebrity guest on 14 August 2009 on Daily Cooks Challenge.[18] In 2010 he presented the quiz show Scream if You Know the Answer! where the contestants have to answer questions whilst on rollercoasters. In July 2010 he was a judge on Don't Stop Believing, a talent show for choirs. He has his own radio show on 95.8 Capital FM, every Sunday from 7–10 pm. In 2009 he briefly made an appearance on an episode of the UK reality show What Katie Did Next, about the life of model Katie Price. Duncan is currently starring in the hit musical Priscilla, Queen of the Desert.

The band represented the UK at the 2011 Eurovision Song Contest in Düsseldorf with the song "I Can" coming in 11th place with 100 points. Blue released their fourth studio album, Roulette on 25 January 2013 with "Hurt Lovers" as the lead single. On 21 February 2013, it was confirmed that the group would be joining The Big Reunion in which six groups from the past, including Liberty X, Atomic Kitten and 5ive, reform for a one-off gig. Beginning in May 2013, the group were to tour Great Britain and Ireland with the other groups in The Big Reunion concert series.[19] On 27 March 2013 the group announced they would embark on their first headlining tour later on in the year, their first tour in nearly ten years.

According to an interview he gave to Gabby Logan on BBC Radio 5 Live on 28 July 2007, he is a great-grandson of Herbert Chapman, the manager of the Arsenal football team of the 1930s.

He has a daughter named Tianie Finn (born 26 February 2005) by former girlfriend Claire Grainger. He defined himself as bisexual in an interview with the News of the World on 12 July 2009,[3][4][20] although in 2012 interviews identified himself as gay.[21] In separate interviews in 2012 and 2014, James specified that he enjoys having sex with women but still identifies as a gay man, making the claim that "Regardless of whether I sleep with women or not, I’m still sleeping with men so I’m gay."[22][23]

This article uses material from the article Duncan James from the free encyclopedia Wikipedia and it is licensed under the GNU Free Documentation License.

Call Me Rock'n'Roll Kiliradio
Update Required To play the media you will need to either update your browser to a recent version or update your Flash plugin.