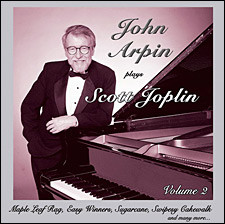 Born in Port McNicoll, Ontario Arpin was educated at The Royal Conservatory of Music graduating at the age of sixteen, and the University of Toronto.

In 2002 he recorded seven CDs of piano solo music on the April Avenue record label. These albums consisted of favorite Broadway themes and familiar pop tunes. While just two compilations are still available in CD format, most of the other tracks can still be found on iTunes. Here is a complete list:

Arpin performed as a solo entertainer and with orchestras throughout the world. In Canada, he performed with Maureen Forrester and Peter Appleyard.

Arpin was nominated three times for Juno Awards, given to show excellence in Canadian music. In June 1998, he won the Scott Joplin Award from the Scott Joplin Foundation of Sedalia, Missouri.

Ragtime great Eubie Blake pronounced John Arpin "the Chopin of Ragtime", while The New York Times labeled him "the Richter of Ragtime". High Fidelity magazine said of one of his albums: "This is the best recorded collection of piano rags that I know of and is, I suspect, the most authentically performed."

Notable among his own compositions are "Jogging Along" (a theme song for the acclaimed CBC radio program Morningside). He also composed the theme for TVOntario's children's shows, Polka Dot Door and Polka Dot Shorts and wrote the music for the shows. Arpin also composed the themes for several CTV network shows in the 1960s. His "Lyric Suite for Piano, Strings and Percussion" won first prize out of 450 entrants in the Yamaha Second International Original Concert in Tokyo. He also arranged music for several Canadian recording acts.

In 2005, he was commissioned by St. Michael's Choir School (Toronto) to compose and arrange a "medley" of Christmas tunes which he titled "Yuletide on the Cool Side". It was very warmly received in its premiere on a concert tour across Canada.

This article uses material from the article John Arpin from the free encyclopedia Wikipedia and it is licensed under the GNU Free Documentation License.

Heart Of Glass Blondie
Update Required To play the media you will need to either update your browser to a recent version or update your Flash plugin.