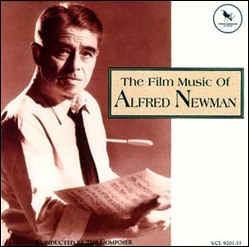 Alfred Newman (March 17, 1900 February 17, 1970) was an American composer, arranger, and conductor of film music, and was also the head of a family of major Hollywood film composers, among them his brothers Emil and Lionel, his children David, Thomas and Maria, and his nephew Randy.

In a career which spanned over forty years, Newman composed music for over 200 films. He was one of the most respected film score composers of his time, and is today regarded as one of the greatest musicians ever to work in film. Along with composers Max Steiner and Dimitri Tiomkin, Newman is considered one of the "three godfathers of film music,"[1] and played a major part in creating the tradition of composing original music for films.

Newman also conducted the music for many film adaptations of Broadway musicals, as well as many original Hollywood musicals. He won Oscars for adapting the scores of such noted musicals as The King and I (1956), Camelot (1967), and Call Me Madam (1953), as well as for adapting the songs in such Hollywood musicals as the Betty Grable vehicle Mother Wore Tights (1947). He conducted the orchestra for all of the film adaptations of the Rodgers and Hammerstein musicals except for Oklahoma! (1955), The Sound of Music (1965), and the animated cartoon version of The King and I (1999), made long after his death. He also conducted the orchestra for the only musical that Rodgers and Hammerstein wrote specifically for film, State Fair (1945), and its 1962 remake. (However, the television remake of South Pacific (2001) was not made until long after Newman's death.)

Newman won nine Academy Awards, the most of any composer. He was nominated a total of 45 times, making him the third-most nominated person in Academy Awards history after Walt Disney and John Williams.

The eldest of ten children, Newman was born in New Haven, Connecticut . A musical prodigy, he began studying piano at the age of five with Sigismund Stojowski, and walked a ten-mile round trip every day to practice on a neighbour's piano.[2] He was able to supplement his poor family's income by playing in theaters and restaurants. He traveled the vaudeville circuit with performer Grace LaRue, billed as "The Marvelous Boy Pianist". He also studied composition with Rubin Goldmark. By the age of twenty he was in New York, beginning a ten-year career on Broadway as the conductor of musicals by composers such as George Gershwin, Richard Rodgers, and Jerome Kern. Then, in 1930, he accompanied Irving Berlin to Hollywood.[3] In Los Angeles, he had private lessons from Arnold Schoenberg.

Newman arrived in Hollywood in 1930 as a conductor. After completing his work on Berlin's project, a film called Reaching for the Moon, Newman found work with Samuel Goldwyn and United Artists, writing his first full film score for Goldwyn's 1931 production, Street Scene. The title song he wrote for this film became a theme to which he returned on several occasions, including the opening of the 1953 film How to Marry a Millionaire, in which Newman is seen conducting the studio orchestra. The theme also appears in films Gentleman's Agreement, I Wake Up Screaming, Cry of the City, and Where The Sidewalk Ends.

For Samuel Goldwyn, in 1939, he wrote the music for Wuthering Heights (1939) (the classic film version starring Laurence Olivier and Merle Oberon). For RKO, he composed the music for The Hunchback of Notre Dame, starring Charles Laughton (also 1939), as well as Gunga Din, and for Paramount Pictures, Beau Geste (also 1939).

In 1940, Newman began a 20-year career as music director for 20th Century-Fox Studios. He composed the familiar fanfare which accompanies the studio logo at the beginning of Fox's productions, and still introduces Fox pictures today. In 1953, Newman wrote the "CinemaScope extension" for his fanfare. This fanfare was re-recorded in 1997 by his son David, also a composer, and it is this rendition that is used today.

At Fox, Newman also developed what came to be known as the Newman System, a means of synchronising the performance and recording of a musical score with the film. The system is still in use today.

Newman's final musical score under his Fox contract was The Best of Everything (1959), and after leaving Fox in 1960, Newman freelanced for the remainder of his career, writing the scores for such films as MGM's How the West Was Won and United Artists's The Greatest Story Ever Told, among others. The former is frequently named his best score, and is listed on AFI's 100 Years of Film Scores.

After reportedly paying to have his score for Captain from Castile recorded with the Fox orchestra, Newman conducted a series of albums for Capitol Records, including a recording of George Gershwin's Variations on "I Got Rhythm". He was active until the end of his life, scoring Universal Pictures' Airport (1970) shortly before his death.

After his death, George Korngold produced an RCA Victor album honoring Newman, Captain from Castile, with the National Philharmonic Orchestra conducted by Charles Gerhardt. The discrete quadraphonic recording was later reissued by RCA on CD with compatible Dolby surround sound.

Newman's final score was for the 1970 film Airport, produced by Universal Pictures. Newman conducted the recording sessions for the music heard in the film, but was unable to conduct the commercial release of the score due to failing health, and the commercial release was conducted by Stanley Wilson. Newman retired from film scoring immediately after completing the score.

Newman died on February 17, 1970, one month before his 70th birthday, at his home in Hollywood, from complications of emphysema.

Alfred Newman is widely regarded as one of the most important figures in the history of film music.

"The legacy of Alfred Newman and his influence on the language of music for the cinema is practically unmatched by anyone in Hollywood history. As an executive, he was hard but fair. As a mentor to his staff he was revered. The orchestras under his baton delighted in his abilities as a conductor. The music he himself composed, often under extreme emotional duress, is among the most gorgeous ever written. [] Not big in physical stature, he was a giant in character, a titan in of the world he loved and dominated. He was a true musical force, and one that cannot in any sense be replaced. "

Between 1930 and 1970, Alfred Newman wrote music for over 200 films of every imaginable type, including a score for the newsreel made from the World War II footage of the Battle of Midway. In addition to his own film scores, Newman acted as musical director on numerous other films. Among his major film scores (and adaptations of other composers' scores) are:

Newman won nine Academy Awards, the third highest number of Oscars ever won by an individual (Walt Disney won twenty-six, Cedric Gibbons won eleven). and was nominated for forty-five, making him the most nominated composer in Oscar history until 2006, when John Williams matched the record upon receiving his 44th and 45th nominations, and later surpassed it in 2012 with his 47th and 48th nominations. Between 1938 and 1957, Newman was nominated for at least one Oscar each year. Forty-three of Newman's nominations were for Best Original Score (making him the second most nominated in that category after John Williams) and two were for Original Song.

In 1940, Newman was nominated for his work on four different films, but lost to Herbert Stothart's score to The Wizard of Oz. This year is also notable for Max Steiner losing the award for his work on Gone with the Wind, a score widely considered to be the best ever written. Victor Young is the only other composer to achieve the feat of receiving four nominations in one year, and the only to do so on two occasions.

Newman's scores for The Hurricane and The Prisoner of Zenda were nominated at a time when composers were not eligible to be nominated in the score category.

He also received posthumous Golden Globe Award and Grammy Award nominations (both for his score to Airport), but did not win either award.

The American Film Institute ranked his score for How the West Was Won as 25 on their list of the 25 greatest film scores. Ten of Newman's other scores were also nominated:

Newman has a star on the Hollywood Walk of Fame at 1700 Vine Street.

He was the head of a family of major Hollywood film composers:

This article uses material from the article Alfred Newman (composer) from the free encyclopedia Wikipedia and it is licensed under the GNU Free Documentation License.

Un'emozione per sempre Eros Ramazzotti
Update Required To play the media you will need to either update your browser to a recent version or update your Flash plugin.