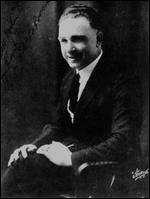 Dominic James "Nick" LaRocca (April 11, 1889 February 22, 1961), was an early jazz cornetist and trumpeter and the leader of the Original Dixieland Jass Band. He is the composer of one of the most recorded jazz classics of all-time, "Tiger Rag". He was part of what is generally regarded as the first recorded jazz band, a band which recorded and released the first jazz recording, "Livery Stable Blues" in 1917.

Nick LaRocca was born in New Orleans, Louisiana, the son of poor Sicilian immigrants. His father was Girolamo LaRocca of Salaparuta, Sicily and his mother was Vita De Nina of Poggioreale, Sicily. Young Nick was attracted to the music of the brass bands in New Orleans and covertly taught himself to play cornet against the wishes of his father who hoped his son would go into a more prestigious profession. LaRocca at first worked as an electrician, playing music on the side.

From around 1910 through 1916 he was a regular member of Papa Jack Laine's bands. While not considered as one of the most virtuosic or creative of the Laine players, he was well regarded for playing a solid lead with a strong lip which allowed him to play long parades without let up or to play several gigs in a row on the same day.

In 1916 he was chosen as a last-minute replacement for Frank Christian in Johnny Stein's band to play a job up in Chicago, Illinois. This band became the famous Original Dixieland Jass Band, making the first commercially issued jazz recordings in New York City in 1917. These recordings were hits and made the band into celebrities.

Soon other New Orleans musicians began following the O.D.J.B.'s path, arriving in New York to play jazz. LaRocca was uneasy about competition. Frank Christian recalled that LaRocca offered him $200 and a return railway ticket to go back home. After a band featuring New Orleans musicians Alcide Nunez, Tom Brown, and Ragbaby Stevens won a battle of the bands against the O.D.J.B., drummer Ragbaby found his drum heads all mysteriously slashed.

The band gave LaRocca the nickname "Joe Blade", and published a song called "Joe Blade, Sharp as a Tack".

LaRocca led this band on tours of England and the United States into the early 1920s, when he suffered a nervous breakdown. He returned to New Orleans and retired from music, going into the construction and contracting business. His chair in the band was taken by Henry Levine, a teenaged trumpeter devoted to traditional jazz stylings. Levine later led one of the house bands on NBC's radio series The Chamber Music Society of Lower Basin Street.

In 1936 Nick LaRocca reunited the ODJB for a successful tour and more recordings. LaRocca proclaimed that he and his band were the inventors of the now nationally popular swing music. He and the reunited Original Dixieland Jass Band performed "Tiger Rag" in The March of Time newsreel segment titled "Birth of Swing," released to U.S. theaters February 19, 1937.[1] Personality conflicts broke up the band again in 1937, and LaRocca again retired from music. He died in New Orleans in 1961.

In the 1950s he wrote numerous vehement letters to newspapers, radio, and television shows, stating that he was the true and sole inventor of jazz music, damaging his credibility and provoking a backlash against him and his reputation and career. He made obviously exaggerated claims that he was "The Creator of Jazz", "The Christopher Columbus of Music", and "The most lied about person in history since Jesus Christ".

When Tulane University established their Archive of New Orleans Jazz in 1958, LaRocca donated his large collection of papers related to the O.D.J.B. to Tulane, after adding numerous glosses in the margins.

Those musicologists and historians who seek to accurately assess LaRocca's contributions to jazz are as much hindered as helped by LaRocca's own exaggerated statements. A small few, mostly in England, have taken LaRocca on his word, while a much larger segment of jazz historians have dismissed his biased and self-serving statements. LaRocca may have inadvertently done much damage to his own reputation. Nevertheless, musicologists and jazz historians can rely on the historical record and the evidence and do not have to go on self-serving statements.

A balanced assessment would have to acknowledge that Nick LaRocca was an important figure in taking jazz from a regional style to international popularity, the leader of the most influential jazz band of the period from 1917 to 1921, and a good player in a very early jazz style on records such as "Clarinet Marmalade".[3] LaRocca's playing and recordings were an important early influence on such later jazz trumpeters as Red Nichols, Bix Beiderbecke and Phil Napoleon. Nick LaRocca's 1917 composition "Tiger Rag" was covered by Louis Armstrong in several different versions throughout his career, while Duke Ellington, Art Tatum, and The Mills Brothers also recorded important and influential cover versions of the jazz standard. Additional information about Nick LaRocca and his biographer can be found in Salvatore Mugno's novel: "Il biografo di Nick LaRocca. Come entrare nelle storie del jazz", Besa Editrice, Nardò (Lecce), Italia, 2005.

In 2006, his 1917 recording of "Darktown Strutters' Ball" with the Original Dixieland Jass Band was inducted into the Grammy Hall of Fame.

This article uses material from the article Nick LaRocca from the free encyclopedia Wikipedia and it is licensed under the GNU Free Documentation License.

So Low Bastian Baker
Update Required To play the media you will need to either update your browser to a recent version or update your Flash plugin.