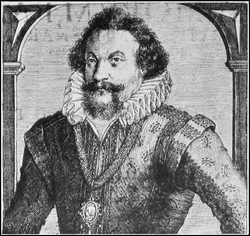 born in 1587 in Halle an der Saale, Sachsen-Anhalt, Germany

From Wikipedia, the free encyclopedia.
Samuel Scheidt (baptized 3 November 1587 – 24 March 1654) was a German composer, organist and teacher of the early Baroque era.

Scheidt was born in Halle, and after early studies there, he went to Amsterdam to study with Sweelinck, the distinguished Dutch composer, whose work had a clear influence on Scheidt's style. On his return to Halle, Scheidt became court organist, and later Kapellmeister, to the Margrave of Brandenburg. Unlike many German musicians, for example Heinrich Schütz, he remained in Germany during the Thirty Years' War, managing to survive by teaching and by taking a succession of smaller jobs until the restoration of stability allowed him to resume his post as Kapellmeister. When Samuel Scheidt lost his job because of Wallenstein, he was appointed in 1628 as musical director of three churches in Halle, including the Market Church.

Scheidt was the first internationally significant German composer for the organ, and represents the flowering of the new north German style, which occurred largely as a result of the Protestant Reformation. In south Germany and some other countries of Europe, the spiritual and artistic influence of Rome remained strong, so most music continued to be derivative of Italian models. Cut off from Rome, musicians in the newly Protestant areas readily developed styles that were much different from those of their neighbors.

Scheidt's music is in two principal categories: instrumental music, including a large amount of keyboard music, mostly for organ; and sacred vocal music, some of which is a cappella and some of which uses a basso continuo or other instrumental accompaniment. In his numerous chorale preludes, Scheidt often used a "patterned variation" technique, in which each phrase of the chorale uses a different rhythmic motive, and each variation is more elaborate than the previous one, until the climax of the composition is reached. In addition to his chorale preludes, he wrote numerous fugues, suites of dances (which were often in a cyclic form, sharing a common ground bass) and fantasias.

This article uses material from the article Samuel Scheidt from the free encyclopedia Wikipedia and it is licensed under the GNU Free Documentation License.

Somebody Like You Anna Rossinelli
Update Required To play the media you will need to either update your browser to a recent version or update your Flash plugin.