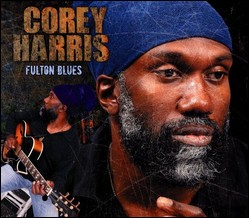 Corey Harris (born February 21, 1969; Denver, Colorado) is an American blues and reggae musician, currently residing in Charlottesville, Virginia. Along with Keb' Mo' and Alvin Youngblood Hart, he raised the flag of acoustic guitar blues in the mid-1990s.[1] He was featured on the 2003 PBS television mini-series, The Blues, in an episode directed by Martin Scorsese.

Harris was born and raised near Denver, Colorado. He graduated from Bates College in Lewiston, Maine with a bachelor's degree in 1991, and was awarded an honorary doctorate in 2007. Harris received a Thomas J. Watson Fellowship for language studies in Cameroon in his early twenties, before taking a teaching post in Napoleonville, Louisiana under the Teach For America program.[1][2] His debut solo album Between Midnight and Day (1995) was produced by composer/producer Larry Hoffman, who discovered him in 1994 in Helena, AR. The record included covers of Sleepy John Estes, Fred McDowell, Charlie Patton, Muddy Waters, and Booker White.[1]

In 2002, Harris collaborated with Ali Farka Toure on his album Mississippi to Mali, fusing blues and Toure's music from northern Mali. In 2003, he contributed to the Northern Blues release Johnny's Blues: A Tribute To Johnny Cash.

Harris has lived and traveled widely in West Africa, an influence that has permeated much of his work. Harris has toured extensively throughout Europe, Canada, West Africa, Japan and Australia. He is known for his solo acoustic work as well as his electric band, formerly known as the '5 x 5'. His current band is known as the Rasta Blues Experience.

He helped Billy Bragg and Wilco to write the music for "Hoodoo Voodoo" on Mermaid Avenue, an album consisting entirely of songs for which the lyrics were written by Woody Guthrie. He also appeared as a musician and vocalist on the album and its sequel, Mermaid Avenue Vol. II.

In September 2007, The John D. and Catherine T. MacArthur Foundation announced that Harris was among 24 people named MacArthur Fellows for 2007.[3] The Fellowship, worth $500,000, is payable over five years.

This article uses material from the article Corey Harris from the free encyclopedia Wikipedia and it is licensed under the GNU Free Documentation License.

All Of My Heart ABC
Update Required To play the media you will need to either update your browser to a recent version or update your Flash plugin.