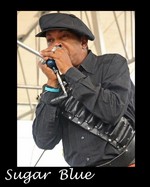 An article in the Chicago Tribune stated: "The sound of Sugar Blue's harmonica could pierce any night... it's the sound of a musician who transcends the supposed limitations of his instrument."[3]

In the mid 1970s, Blue played as a session musician on Johnny Shines' Too Wet to Plow (1975) and with Roosevelt Sykes. Whilst in the company of the latter, Blue met Louisiana Red and the twosome toured and recorded in 1978.[4]

Taking advice from Memphis Slim, in the late 1970s Blue traveled to Paris, France. This led to him playing on several The Rolling Stones tracks ("Some Girls", "Send It to Me" and the aforementioned "Miss You"). Trombonist Mike Zwerin backed Blue on his solo debut album, Crossroads (1979). Following the release of his From Chicago to Paris (1982), Blue joined Willie Dixon's Chicago Blues All Stars.[4] In 1984, Blue's track "Another Man Done Gone", appeared on the compilation album, Blues Explosion. It won a Grammy in 1985 for Best Traditional Blues Album.[5]

This article uses material from the article Sugar Blue from the free encyclopedia Wikipedia and it is licensed under the GNU Free Documentation License.

Wait And See Nick Mellow
Update Required To play the media you will need to either update your browser to a recent version or update your Flash plugin.