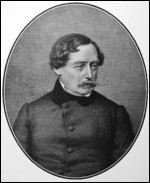 He was born at Fensmark near Næstved, where his father was the vicar. He went to the University of Copenhagen in 1815, and studied theology, taking his degree in 1824. He began to publish verse in 1819, but no collected volume appeared until 1828. Meanwhile, from 1824 to 1830, Winther was supporting himself as a tutor. A large inheritance from his uncle, Rasmus Winther, allowed him in 1830 to travel to Italy for a year. In 1835 a second volume of lyric poems appeared, and in 1838 a third. In 1841 King Christian VIII of Denmark appointed Winther to travel to Mecklenburg to instruct Princess Mariane, on the occasion of her betrothal to the Crown Prince of Denmark, in the Danish language.When he was over fifty, Winther married.

Besides the nine or ten volumes of lyrical verse mentioned above, Winther published Hjortens Flugt ("The Stag's Flight"), an epical romance in verse (1855). Taking place in 15th Century South Zealand, written in Nibelungenlied stanzas and probably inspired by Byrons Mazeppa it tells about young love, demonic forces and witchcraft with a running stag as the reappearing motive of the untamed forces of Nature. However in the lyric intervals it is also praising the idylls and freedom of Nature. In generations it became a traditional confirmation present for Danish youths in that respect competing with Paludan-Müllers Adam Homo.

Many of Winthers shorter poems have won popularity and have become transformed into songs, for instance Flyv fugl, flyv (Fly, Bird, fly), and some of the verses from his collection Til Een, 1842, (For One) a tribute to his wife. A classic is also the small humorous epic poem for children: Flugten til Amerika 1830, (Engl. Transl. The Flight to America, 1976). Besides must be mentioned In the Year of Grace a novel (1874); and other works in prose. He died in Paris, but his body was brought to Denmark, and was buried in the heart of the woods.[2]

As a lover of Woman and Nature Winther is perhaps one of the Danish authors who is most closely connected to the concept of a romantic poet. Many later Danish lyrics have been more or less luckily inspired by his verses. His special ability of making Nature accompanying the action and his elegant and, compared with his time, rather sensual tributes to women was something new. Through The Stag's Flight, his main work, he has won the name of The Singer of Zealand.[3]

This article uses material from the article Christian Winther from the free encyclopedia Wikipedia and it is licensed under the GNU Free Documentation License.

La vetrina Renato Zero
Update Required To play the media you will need to either update your browser to a recent version or update your Flash plugin.