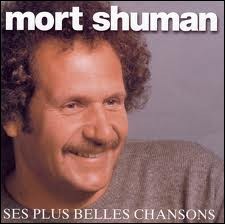 Shuman was born in Brooklyn, New York, United States,[3] of Polish Jewish immigrants and went to Abraham Lincoln High School, subsequently studying music at the New York Conservatory. He became a fan of R&B music and after he met Doc Pomus the two teamed up to compose for Aldon Music at offices in New York City's Brill Building. Their songwriting collaboration saw Pomus write the lyrics and Shuman the melody, although occasionally each worked on both. Their compositions would be recorded by artists such as Dion, The Flamingos,[4] Andy Williams, Bobby Darin, Fabian, Ajda Pekkan, The Drifters, and Elvis Presley, among others.[3] Their most famous songs include "A Teenager in Love", "Turn Me Loose", "This Magic Moment", "Save The Last Dance For Me", "Little Sister", "Can't Get Used to Losing You", "(Marie's the Name) His Latest Flame", "Viva Las Vegas" and "Sweets for My Sweet".[3]

Pomus often drew on life events which inspired his creativity. It was after a break-up with his girlfriend that Pomus, who had been driving in his car, was struck in awe by the sounds of the car horns blaring amidst his thoughts. Arriving at the studio, Pomus attempted to assimilate the sound of the horns and penned an introduction to a piece he initially titled "A Crowded Avenue". Later, the work progressed with Shuman, who helped finalize the draft. A chorus was added and the name of the song was changed to "Can't Get Used to Losing You", which became one of the biggest hits for Andy Williams in 1963.

With the advent of the British invasion, they moved to London where they penned songs for a number of British musicians. After the partnership with Doc Pomus ended in 1965, Shuman moved to Paris, France, where he wrote songs for Johnny Hallyday and embarked on his own recording career.[3] One of his hits in the early 1970s was "(Il Neige Sur) Le Lac Majeur". He also wrote a couple of hits in the UK (including The Small Faces, "Sha-La-La-La-Lee" and Cilla Black, "Love's Just A Broken Heart", both co-written with Kenny Lynch), as well as a musical, Budgie (lyrics by Don Black).[3] With the Welsh songwriter Clive Westlake, he wrote "Here I Go Again", which was recorded by The Hollies.[3] Billy J. Kramer enjoyed success with another Shuman song, "Little Children".[3]

In 1968, Shuman teamed with Eric Blau and adapted the French lyrics of songs by the Belgian composer Jacques Brel used as the basis of the successful off-Broadway production Jacques Brel is Alive and Well and Living in Paris.[3] Some of the songs from the show were subsequently recorded by Scott Walker, including "Jackie" and "Mathilde". Shuman appeared in both the stage revue and the 1975 film adaptation.[3] This was followed the next year with work on the soundtrack of the film Sex O'Clock U.S.A., which is notable for featuring one of the earliest known gay songs, "You're My Man,"[5] while another one of his compositions from the soundtrack, "Baby Come On" (billed under the Sex O'Clock U.S.A. name during its chart run) become a modest hit on Billboard's Disco chart, peaking at number 37 in July 1977. He also did many collaborations with the Israeli singer Mike Brant, and composed film scores, often French movies, including A Day at the Beach (1970), Romance of a Horsethief (1971), Black Thursday (1974), À nous les petites Anglaises (1976), Monsieur Papa (1977) and The More It Goes, the Less It Goes (1977).

Shuman was elected to the Songwriters Hall of Fame in 1992. He also worked occasionally as an actor, notably appearing with Jodie Foster in The Little Girl Who Lives Down the Lane (for which he was also musical supervisor).

He died of cancer on 2 November 1991,[3] leaving his wife, Maria-Pia and their four daughters, Maria-Cella, Barbara, Maria-Pia and Eva-Maria.[6] Doc Pomus had died in March of the same year.

Shuman was named one of the 2010 recipients of the Ahmet Ertegun Award from the Rock and Roll Hall of Fame. He joined his early collaborator Doc Pomus, who was inducted in 1992.[7]

This article uses material from the article Mort Shuman from the free encyclopedia Wikipedia and it is licensed under the GNU Free Documentation License.

Surrender Shana Pearson
Update Required To play the media you will need to either update your browser to a recent version or update your Flash plugin.