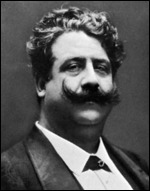 Ruggero (or Ruggiero)[1] Leoncavallo (Italian pronunciation: [rudˈdʒɛːro leoŋkaˈvallo]; 23 April 1857 – 9 August 1919) was an Italian opera composer and librettist. Although he produced numerous operas and other songs throughout his career it is his opera Pagliacci (1892) that remained his lasting contribution, despite attempts to escape the shadow of his greatest success.

Today he remains largely known for Pagliacci, one of the most popular works in the repertory, appearing as number 20 on the Operabase list of the most-performed operas worldwide in the 2013/14 season.[2] His other well-known works include the song "Mattinata", popularized by Enrico Caruso, as well as the symphonic poem La nuit de mai.

The son of Vincenzo Leoncavallo, a police magistrate and judge, Leoncavallo was born in Naples on 23 April 1857.[3] As a child, he moved with his father to the town of Montalto Uffugo in Calabria, where Leoncavallo lived during his adolescence. He later returned to Naples and was educated at the city's San Pietro a Majella Conservatory and later the University of Bologna studying literature under famed Italian poet Giosuè Carducci.

In 1879 Leoncavallo's uncle Giuseppe, director of the press department at the Foreign Ministry in Egypt, suggested that his young nephew come to Cairo to showcase his pianistic abilities. Arriving shortly after the deposition of Khedive Ismail, Leoncavallo eventually secured work as a piano teacher and pianist to the brother of the new Khedive Tewfik Pasha. His time in Egypt concluded abruptly in 1882 after revolts in Alexandria and Cairo led by ‘Urabi in which the composer quickly departed for France. In Paris, Leoncavallo found lodging in Montmartre.

An agent located in the Rue du Faubourg-Saint-Denis secured Leoncavallo employment as an accompanist and instructor for artists who performed in Sunday concerts mostly at cafés. It was during this time that he met Berthe Rambaud (1863–1926) a "preferred student", who became his wife in 1895. Increasingly inspired by the French romantics, particularly Alfred de Musset, Leoncavallo began work on a symphonic poem based on Musset's poetry entitled "La nuit de mai". The work was completed in Paris in 1886 and premiered in April 1887 to critical acclaim. With this success and now with enough accumulated money Leoncavallo and Rambaud would return to Milan to begin his career as a composer of opera.

Back in Italy, Leoncavallo spent some years teaching and attempting ineffectively to obtain the production of more than one opera, notably Chatterton. In 1890 he saw the enormous success of Pietro Mascagni's Cavalleria rusticana and wasted no time in producing his own verismo work, Pagliacci. (According to Leoncavallo, the plot of this work had a real-life origin: he claimed it derived from a murder trial, in Montalto Uffugo, over which his father had presided.)

Pagliacci was performed in Milan in 1892 with immediate success; today it is the only work by Leoncavallo in the standard operatic repertory.[4] Its most famous aria "Vesti la giubba" ("Put on the costume" or, in the better-known older translation, "On with the motley") was recorded by Enrico Caruso and laid claim to being the world's first record to sell a million copies (although this is probably a total of Caruso's various versions of it made in 1902, 1904 and 1907).

The next year his I Medici was also produced in Milan, but neither it nor Chatterton (belatedly produced in 1896)—both early works—obtained much lasting favour. Much of Chatterton, however, was recorded by the Gramophone Company (later HMV) as early as 1908, and remastered on CD almost 100 years later by Marston Records. Leoncavallo himself conducts the performance or at very least supervises the production.[5]

It was not until Leoncavallo's La bohème was performed in 1897 in Venice that his talent obtained public confirmation. However, it was outshone by Puccini's opera of the same name and on the same subject, which was premiered in 1896. Two tenor arias from Leoncavallo's version are still occasionally performed, especially in Italy.

Subsequent operas by Leoncavallo were in the 1900s: Zazà (the opera of Geraldine Farrar's famous 1922 farewell performance at the Metropolitan Opera), and 1904's Der Roland von Berlin. In 1906 the composer brought singers and orchestral musicians from La Scala to perform concerts of his music in New York, as well as an extensive tour of the United States. The tour was, all in all, a qualified success.[6] He had a brief success with Zingari which premiered in Italian in London in 1912, with a long run at the Hippodrome Theatre. Zingari also reached the United States but soon disappeared from the repertoire.[7]

After a series of operettas, Leoncavallo appeared to have tried for one last serious effort with Edipo re. It had always been assumed that Leoncavallo had finished the work but had died before he could finish the orchestration, which was completed by Giovanni Pennacchio. However, with the publication of Konrad Dryden's biography of Leoncavallo[8] it was revealed that Leoncavallo may not have written the work at all (although it certainly contains themes by Leoncavallo). A review of Dryden's study notes: "That fine Edipo re ... was not even composed by [Leoncavallo]. His widow paid another composer to concoct a new opera using the music of Der Roland von Berlin. Dryden didn't find one reference to the opera in Leoncavallo’s correspondence nor is there a single note by him to be found in the handwritten score."[9]

What is certain is that in Edipo re, a short one act work, the composer (whoever it actually was) uses exactly the same melody for the final scene "Miei poveri fior, per voi non più sole..." (with the blinded Edipo) as in the act 4 soprano aria from Der Roland von Berlin. It has been assumed (see The New Grove Dictionary of Opera) that Leoncavallo left the opera more or less complete (except for the orchestration). Pennacchio may either have concocted the opera or may have had to do more to Leoncavallo's more or less complete work to "fill in the gaps" using Leoncavallo's earlier music.[10] Another clue to demonstrate that Leoncavallo had no or little part in Edipo re is that unusually, in fact exceptionally, Leoncavallo did not write the libretto. The libretto for Edipo re was written by Giovacchino Forzano, who also wrote Il piccolo Marat for Pietro Mascagni and two of the one-act operas for Puccini's Il trittico. Further, the orchestration of Edipo re, consisting all too often of massed strings and a depressingly constant use of the cymbal, does not seem the work of Leoncavallo whose own orchestration, whilst sometimes uninspired, is at very least competent.

From the 1970s Edipo re has had a number of revivals, both as concert performances (including Rome 1972, Concertgebouw (Amsterdam) 1977 and Konzerthaus, Vienna 1998) as well as fully staged productions at the Teatro Regio, Turin, in 2002 and the Thessaloniki Opera 2008.[11] It remains to be seen who will be given the credit for this opera in future revivals.

Leoncavallo died in Montecatini Terme, Tuscany, on 9 August 1919. His funeral was held two days later, with hundreds in attendance, including fellow composer Pietro Mascagni and longtime rival Giacomo Puccini. He was buried in the Cimitero delle Porte Sante in Florence.

70 years after his death a campaign was launched to move the composer's remains to Brissago, Switzerland, after talk of a letter written by Leoncavallo claimed to show that the composer had desired to be buried there originally, although no such letter was ever found. Having become an honorary citizen of Brissago (he owned a lavish summer residence, Villa Myriam, in the town) in 1904 Leoncavallo had mentioned in a speech that he would not mind having a resting place in the town's Madonna di Porte cemetery, but it was never a written request in his will. Regardless the campaign to move Leoncavallo's remains moved ahead and was granted official approval by Piera Leoncavallo-Grand, the last remaining descendant of the composer. The body was exhumed for transfer to Switzerland along with the remains of his wife Berthe, who died in 1926.

The Museo Leoncavallo (Leoncavallo Museum) was established in 2002 in Brissago to commemorate the composer with personal items and original manuscripts on display including statues representing characters from his other operas including Zazà and Der Roland von Berlin.

Little or nothing from Leoncavallo's other operas is heard today, but the baritone arias from Zazà were great concert and recording favourites among baritones and Zazà as a whole is sometimes revived, as is his La bohème. The tenor arias from La bohème remain recording favorites.

Leoncavallo also composed songs, most famously "Mattinata", which he wrote for the Gramophone Company (which became HMV) with Caruso's unique voice in mind. On 8 April 1904, Leoncavallo accompanied Caruso at the piano as they recorded the song. On 8 December 1905 he recorded five of his own pieces for the reproducing piano Welte-Mignon.[12][13]

Leoncavallo was the librettist for most of his own operas. Many considered him the greatest Italian librettist of his time after Boito. Among Leoncavallo's libretti for other composers is his contribution to the libretto for Puccini's Manon Lescaut.

This article uses material from the article Ruggero Leoncavallo from the free encyclopedia Wikipedia and it is licensed under the GNU Free Documentation License.

Constant Craving K. D. Lang
Update Required To play the media you will need to either update your browser to a recent version or update your Flash plugin.