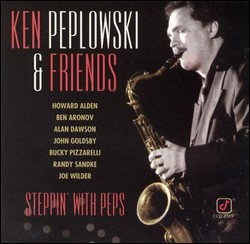 From Wikipedia, the free encyclopedia.
Ken Peplowski (born May 23, 1959) is a jazz clarinetist and tenor saxophonist born in Cleveland, Ohio, known primarily for playing in the swing music idiom. He is sometimes compared to Benny Goodman in terms of tone and virtuosity. For over a decade, Peplowski recorded for Concord Records; his most recent albums have appeared on the Nagel-Heyer Records record label.

In 2007 Peplowski was named jazz advisor of Oregon Festival of American Music and music director of Jazz Party at The Shedd, both in Eugene, Oregon.

This article uses material from the article Ken Peplowski from the free encyclopedia Wikipedia and it is licensed under the GNU Free Documentation License.