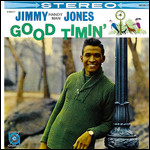 James "Jimmy" Jones (June 2, 1937[1] August 2, 2012) was an American singer-songwriter who moved to New York while a teenager.[2] According to Allmusic journalist Steve Huey, "best known for his 1960 R&B smash, 'Handy Man,' Jones sang in a smooth yet soulful falsetto modeled on the likes of Clyde McPhatter and Sam Cooke."[2]

Jones was born in Birmingham, Alabama. Starting his entertainment career as a tap dancer, he joined a doo-wop group named the Berliners in 1954. They later changed their name to Sparks Of Rhythm.[2] In 1955 Jones co-wrote "Handy Man", which was recorded by the Sparks Of Rhythm in 1956 (after Jones left the group). After recording with other groups, Jones went solo and, in 1959, teamed up with Otis Blackwell who reworked "Handy Man" which Jones recorded on the subsidiary MGM record label, Cub.[2] When the flute player did not show up for the session, Blackwell famously whistled on the recording. "Handy Man", released in 1959, gave Jones his first US and UK hit single.[2] "Handy Man" went to No. 2 on the Billboard Hot 100 in 1960, and peaked at No. 3 in the UK Singles Chart. "Handy Man", which introduced a rock falsetto singing style to the British audience, later scored hits for Del Shannon and James Taylor.[2][3] A few months later in 1960, Jones' recording of "Good Timin'" climbed to No. 1 in the UK[4] and No. 3 in the US.[2] Both "Handy Man" and "Good Timin'" were million sellers, earning Jones two gold discs.[5]

Although Jones had only the two million-selling Top 40 hits, he nevertheless kept active in the music industry as both a songwriter and recording artist and made personal appearances as he saw fit. Jones' subsequent career was low key, although it included three more UK chart entries in the following twelve months.[4] Jones kept recording through most of the 1960s and remained with Cub until 1962, scraping the lower reaches of the charts with "That's When I Cried" and "I Told You So."[2] He recorded for Ro-Jac and Vee-Jay over the next two years, and his work gradually took on a New York style uptown soul flavor.[2] From 1965 to 1967, he recorded for Roulette, Parkway, and Bell, none of which restored his commercial standing.[2]

His considerable influence using falsetto extended to Del Shannon, who paid homage to Jones and also Bill Kenny for Shannon's falsetto style. Later singers who used falsetto included Frankie Valli of The Four Seasons, Lou Christie, Robert John, and Barry Gibb. Gibb cited Shannon, in turn, as an influence for his disco vocalizations with the Bee Gees. He released Grandma's Rock & Roll Party in the 1990s on CD, perhaps, in part due to his popularity in the UK Northern soul circles.[2] It included new versions of "Handy Man" and "Good Timin'". In 2002, Castle/Sanctuary issued a double album anthology titled Good Timin': The Anthology.[2]

This article uses material from the article Jimmy Jones (singer) from the free encyclopedia Wikipedia and it is licensed under the GNU Free Documentation License.

Love Divine (Unplugged) Migu
Update Required To play the media you will need to either update your browser to a recent version or update your Flash plugin.