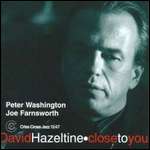 Today a major pianist in the New York and Japan scenes, David Hazeltine has been playing gigs since he was thirteen. He did not seriously consider going into music until right before college. Once he entered into the jazz world he was encouraged by Chet Baker who told him to go to New York. Born in Milwaukee, Wisconsin, where he studied music with local pianist Will Green, worked as the house pianist for national acts at the former Jazz Gallery, and helped to retool the Wisconsin Conservatory of Music's jazz program, Hazeltine has been living in New York for several decades. Although he returned to Milwaukee briefly because of domestic issues, he considered the town constraining and not a good place to make his career. He has played and recorded with Jon Hendricks, Louis Hayes, and One for All and done composing and arranging as well as teaching. Although he is a pianist he feels more influenced by saxophonists, particularly Charlie Parker.

Hazeltine, in the tradition of Parker, works within and across the constrains of bebop, and arcs toward the aesthetic of consonance rather than dissonance: reaching toward beauty in harmony, melody, rhythm and never straying too deeply from his roots. He is particularly influenced by Parker, Rollins, Bud Powell and early Miles Davis. Although seemingly hard-line about the tradition, Hazeltine has done an impressive amount of innovation and is a gifted arranger and composer. Of particular note are his arrangements of pop tunes, which appear on most of his CDs. In fact, he is one of the few contemporary jazz musicians who continue the tradition of making contemporary tunes into "standards," particularly on his CD Modern Standards.

This article uses material from the article David Hazeltine from the free encyclopedia Wikipedia and it is licensed under the GNU Free Documentation License.