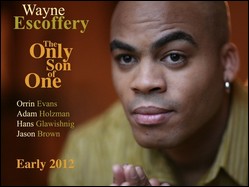 Wayne Escoffery (born 23 February 1975 in London, England) is a jazz saxophonist based in New York City.

In addition to performing with his own Quartet and Quintet, Escoffery currently performs and tours with Ben Riley's Monk Legacy Septet, The Mingus Band, Abdullah Ibrahim's Akaya, The Carolyn Leonhart Group, and Jazz at Lincoln Center: The Music of Miles Davis. He is a member of The Tom Harrell Quintet.

All About Jazz's J. Robert Bragonier said that Escoffery "is a talented youngster capable of long, flowing lines, noteworthy creativity, and a broad range of expressiveness."

Wayne and his mother emigrated to the United States and settled in New Haven, Connecticut in 1986.

At age eleven, Escoffery joined The New Haven Trinity Boys Choir and began taking saxophone lessons from Malcolm Dickinson. At sixteen, he left the choir and began a more intensive study of the saxophone, attending the Jazzmobile in New York City, the Neighborhood Music School in New Haven, and the ACES Educational Center for the Arts in New Haven. During his senior year in high School, he attended the Artists Collective, Inc. in Hartford, Connecticut. He met Jackie McLean, a well known alto saxophonist and founder of the jazz program at The Hartt School.

Escoffery married vocalist Carolyn Leonhart in 2004.[1] The two have one child and have collaborated on many performances. They appear together on several albums.

This article uses material from the article Wayne Escoffery from the free encyclopedia Wikipedia and it is licensed under the GNU Free Documentation License.

I'm Your Baby Tonight Whitney Houston
Update Required To play the media you will need to either update your browser to a recent version or update your Flash plugin.