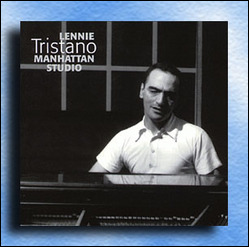 Leonard Joseph Tristano (19 March 1919 18 November 1978) was a jazz pianist, composer and teacher of jazz improvisation. He performed in the cool jazz, bebop, post bop and avant-garde jazz genres. Historically important are the first recorded free group improvisations (Intuition), his preoccupation with atonality and Bach's counterpoint, as well as his early experimentations with recording techniques such as overdubbing (his own playing). In addition, his work as a jazz educator meant that he has exerted a substantial influence on jazz through figures such as Lee Konitz and Warne Marsh.

Tristano was born in Chicago. His parents were cousins with roots in Campania, Italy. He was born with weak eyesight during the influenza epidemic of 1919. Before the age of six he was totally blind. He first went to the School for the Blind in Jacksonville, Illinois. He later attended the American Conservatory of Music in Chicago where his aunt took notes for him. He was awarded a B.A. in 1943.

Tristano's interest in jazz inspired a move to New York City in 1946. His advanced grasp of harmony pushed his music beyond even the complexities of the contemporary bebop movement, though Tristano was always explicit about acknowledging his enormous debt to Charlie Parker and Bud Powell. Other key ingredients in his style were Nat King Cole and Art Tatum, influences most audible in his early drummerless trio recordings. Though he and his followers remained at something of a slant to mainstream bebop, Tristano did on occasion play and record with bebop's preeminent figures such as Dizzy Gillespie and Charlie Parker, and he was a pallbearer at Parker's funeral.[1] The "Tristano school" has often been contrasted with bebop, by being labelled "cool jazz",[2] though this risks lumping his music in with unrelated styles like the West Coast cool jazz of the 1950s.

Among Tristano's most important earlier recordings was a 1949 sextet session with his students, saxophone players Lee Konitz and Warne Marsh. After recording a number of conventionally structured compositions, Tristano had the group record "Intuition" and "Digression". Both pieces were completely improvised, with no prearranged melody, harmony or rhythm.[3] These two songs are often cited as the first recorded examples of free jazz or free improvisation.

His 1953 recording "Descent into the Maelstrom" is especially significant: an experiment in overdubbing which in its harsh atonality anticipates the much later work of players like Cecil Taylor[4] and Borah Bergman (who specifically mentioned the piece as an important influence on his work).

Tristano released two important albums on Atlantic Records, which remain his best-known work. Lennie Tristano, from 1955, is famous for including innovative experiments with overdubbing ("Requiem" and "Turkish Mambo") and altered tape-speed ("Line Up" and "East 32nd").[5] The second side is a straightforward club gig in the company of Lee Konitz. "Requiem", a tribute to the late Charlie Parker, is notable for its deep blues feeling – a style not usually associated with Tristano. However, perhaps the most significant work lies in the composition "Line Up", a spiralling linear improvisation based on the changes to "All of Me".

The New Tristano (1962) remains a landmark in solo jazz piano.[6] Though on this occasion no overdubbing was used, the music is just as densely conceived, especially the classic "G Minor Complex", an improvisation on the changes of "You'd Be So Nice to Come Home To". Tristano's mimicking of a jazz bassist's accompaniment with his left hand on these recordings is distinctive and often imitated. The combination of this line with the dazzling line-spinning of his right hand also gives the music a contrapuntal flavour explicitly paying homage to Bach.

Tristano's distrust of jazz record labels and increasingly infrequent public performances meant that his recordings are comparatively scarce, and many of them are concert recordings of very variable fidelity. Some of his live performances were recorded and have been released, including those from the Half Note Club in New York from the 1950s, and concerts in Europe from the 1960s. He was one of the first musicians to start his own record label, Jazz Records, which is still in existence and is run by his daughter, the drummer Carol Tristano. The label Inner City released a compilation of various Tristano recordings, Descent into the Maelstrom.

In 2013 Tristano was honored with induction into the Grammy Hall of Fame for the 1949 album Crosscurrents.[7]

By the mid-1950s, Tristano focused his energies more on music education. He can be regarded as one of the first jazz teachers to teach jazz in a structured way, beginning in the late 1940s and continuing to his death in 1978.

Tristano approached each student individually and hence lessons were structured to meet the needs of each individual; students were challenged in ways that would allow them to find and express their own musical feelings, or style.

Tristano would often have his students learn to sing and play the improvised solos by some of best-known names in jazz, including Louis Armstrong, Lester Young, Billie Holiday, Charlie Parker and Bud Powell. Solos were often learned by first playing them along with the original recording, from a phonograph record or magnetic audio tape, at half the normal speed, hence the pitch would drop by one octave. Eventually the student would learn the solo at normal speed. Tristano stressed that the student was not learning to imitate the artist, but rather should use the experience to gain insight into the musical feeling conveyed by the artist.

One of the key teaching tools used by Tristano was the metronome. In practicing fundamentals such as scales, the student would set the metronome at or near to its slowest setting and play the scales and arpeggios in a legato fashion covering the full range of their instrument with very even dynamics. Developing a strong awareness of the beat was a key element of his teaching philosophy.

A book by bassist Peter Ind, Jazz Visions: Lennie Tristano and His Legacy, was published in October 2005. The book documents and discusses Tristano's contributions to jazz music.

This article uses material from the article Lennie Tristano from the free encyclopedia Wikipedia and it is licensed under the GNU Free Documentation License.

Messaggio Alice
Update Required To play the media you will need to either update your browser to a recent version or update your Flash plugin.