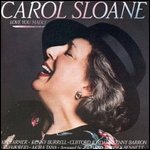 Carol Sloane (born March 5, 1937) is an American jazz singer born in Providence, Rhode Island, who has been singing professionally since she was 14, although for a time in the 1970s she worked as a legal secretary in Raleigh, North Carolina. In addition, between September 1967 and May 1968, she occasionally wrote album reviews for Down Beat.[1] She currently lives in Stoneham, Massachusetts.[2]

One of her early efforts was working with Les and Larry Elgart's orchestra. Later she filled in for Annie Ross of Lambert, Hendricks & Ross. By 1961, success at the Newport Jazz Festival led to albums for Columbia Records.[3] Her career stalled for a time in the 1970s, but resumed by the 1980s. She later signed with Concord Records and had some successes touring in Japan. In 1986, she married Buck Spurr.[4] In April 2016 Sloane was among the inductees who were brought into the Rhode Island Music Hall of Fame (RIMHOF).[5]

This article uses material from the article Carol Sloane from the free encyclopedia Wikipedia and it is licensed under the GNU Free Documentation License.

Coming Home Tonight Sal Nurrito
Update Required To play the media you will need to either update your browser to a recent version or update your Flash plugin.