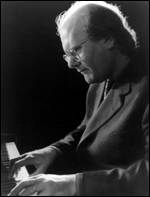 Jim McNeely (born May 18, 1949) is a Grammy award-winning jazz pianist, composer, and arranger.

McNeely was born in Chicago, Illinois. He earned a Bachelor of Music degree from the University of Illinois, and moved to New York City in 1975. In 1978 he joined the Thad Jones/Mel Lewis Big Band. He spent six years as a featured soloist with that band and its successor, Mel Lewis and the Jazz Orchestra (now the Vanguard Jazz Orchestra). In 1981 he began a four-year tenure as pianist/composer with the Stan Getz Quartet. From 1990 until 1995 he held the piano chair in the Phil Woods Quintet. In 1996 he re-joined the Vanguard Jazz Orchestra as pianist and composer-in-residence, a position that he still holds. From 1998 to 2003 he was chief conductor of the DR Big Band in Copenhagen, Denmark, and is currently chief conductor of the HR (Hessischer Rundfunk) Big Band in Frankfurt, Germany. He continues to appear as guest with many of Europe's leading jazz orchestras such as The Metropole Orchestra (The Netherlands) and The Stockholm Jazz Orchestra (Sweden). McNeely also leads his own tentet, his own trio, and appears as soloist at concerts and festivals worldwide. He has recorded more than a dozen CDs under his own name, earning nine Grammy nominations between 1997 and 2006. In 2008, he was awarded a Grammy with the Vanguard Jazz Orchestra for their album Monday Night Live at the Village Vanguard (Planet Arts).

McNeely serves on the faculties of Manhattan School of Music, William Paterson University, and is musical director of the BMI Jazz Composers Workshop.

From 2011 on McNeely will conduct the hr-Bigband, the bigband of the Hessische Rundfunk in Frankfurt am Main, Germany.

A former resident of Montclair, New Jersey,[1] he currently resides in Maplewood, New Jersey. He has two siblings, a younger sister and a younger brother.

This article uses material from the article Jim McNeely from the free encyclopedia Wikipedia and it is licensed under the GNU Free Documentation License.

Drink Up Wintershome
Update Required To play the media you will need to either update your browser to a recent version or update your Flash plugin.