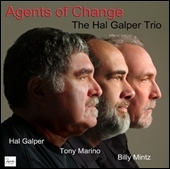 He studied classical piano as a boy, but switched to jazz which he studied at the Berklee College of Music from 1955 to 1958.[1] He hung out at Herb Pomeroy's club, the Stable, hearing local Boston musicians such as Jaki Byard, Alan Dawson and Sam Rivers. Galper started sitting in and became the house pianist at the Stable and later on, at Connelly's and Lenny's on the Turnpike. He went on to work in Pomeroy's band.

Later on he worked with Chet Baker and Stan Getz and accompanied vocalists Joe Williams, Anita O'Day, and Chris Connor.

Between 1973-1975, Galper played in the Cannonball Adderley Quintet replacing George Duke.[2] He performed in New York and Chicago jazz clubs in the late 1970s. Around this time, Galper recorded several times with guitarist John Scofield for the Enja label.

Galper left the Woods group in August 1990 to start touring and recording with his new trio with Steve Ellington on drums and Jeff Johnson on bass. From 1990-1999, Hal's group was on the road six months a year.

Galper is internationally known as an educator. His theoretical and practical articles have appeared in six of Down Beat editions. His scholarly article on the psychology of stage fright, originally published in the Jazz Educators Journal, has subsequently been reprinted in four other publications.

Hal is on the faculty of Purchase College and the New School for Jazz and Contemporary Music.

This article uses material from the article Hal Galper from the free encyclopedia Wikipedia and it is licensed under the GNU Free Documentation License.

Closer To You Schoel
Update Required To play the media you will need to either update your browser to a recent version or update your Flash plugin.