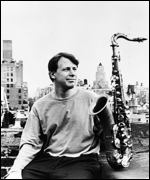 Chris Potter was born in Chicago, Illinois, but his family soon moved to Columbia, South Carolina, where he spent his formative years. Potter showed an early interest in a wide variety of different music and easily learned several instruments including the guitar and piano. He quickly realized after hearing Paul Desmond that the saxophone would be the vehicle that would best allow him to express himself musically.

He played his first professional jazz gig on alto sax at age thirteen after mastering the complex musical language of Charlie Parker. He developed a devoted local following while performing with noted Columbia jazz musicians Johnny Helms and Terry Rosen as well as with others in the jazz community who nurtured what was recognized as a prodigious musical talent.

After leaving Columbia upon his graduation from Dreher High School, Chris attended college in New York City, first at the New School, and later at the Manhattan School of Music. Upon his arrival in New York he began performing with bebop legend Red Rodney and quickly gained a reputation as a rising new star of the saxophone.

His 1998 CD Vertigo was named one of the year's top ten jazz CDs by both Jazziz magazine and The New York Times. He was nominated for a Grammy Award for Best Jazz Instrumental Solo for his work on the Joanne Brackeen recording Pink Elephant Magic. His 2004 CD Lift: Live At The Village Vanguard was named one of the year's ten best new jazz recordings by Fred Kaplan of Slate. His 2006 release, Underground, on which he records with an electric, more "groove"-based ensemble featuring Craig Taborn on keyboard; Wayne Krantz or Adam Rogers on guitar; and Nate Smith on drums, was followed closely by the 2007 release Follow the Red Line: Live at the Village Vanguard, featuring Adam Rogers on all six of its tracks. Another Underground group recording was released in 2009, Ultrahang.

Potter has appeared many times in the highly respected Down Beat Critic's and Reader's Polls and received the top prize as Rising Star for Best Tenor Saxophonist in 2004,[2] 2005,[3] 2006[4] and 2007.[5] He was recently honored as Tenor Saxophonist of the Year 2013 by the Jazz Journalists Association.[6] Furthermore, Potter is widely respected among musicians and critics alike.

This article uses material from the article Chris Potter (jazz saxophonist) from the free encyclopedia Wikipedia and it is licensed under the GNU Free Documentation License.

Kiss Me Dermot Kennedy
Update Required To play the media you will need to either update your browser to a recent version or update your Flash plugin.