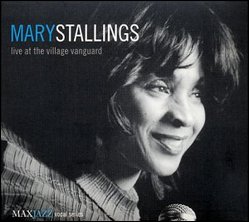 Mary Stallings was born in San Francisco, California, one of eleven children. She grew up in the neighborhood of Laurel Heights singing in the black gospel choir of the First African Methodist Episcopal Zion Church. By her teens, Stallings began singing in San Francisco-area night clubs such as the Hungry i, The Purple Onion, and El Matador. She performed with such artists as Ben Webster, Cal Tjader, Earl Hines, Red Mitchell, Teddy Edwards, and the Montgomery brothers (Wes, Monk, and Buddy).[1]

Before graduating from high school, she joined R&B pioneer Louis Jordan's Tympani Five. In the early 1960s, she performed with Dizzy Gillespie at San Francisco's Black Hawk nightclub and eventually with Gillespie at the 1965 Monterey Jazz Festival.

Perhaps best known for her 1961 collaboration with vibraphonist Cal Tjader on the album Cal Tjader Plays, Mary Stallings Sings on Fantasy Records, engagements in Tokyo, Manila and Bangkok ensued, along with work up and down the West Coast. She spent a year in the late 1960s performing in Nevada with Billy Eckstine, and toured South America with Gillespie's band in 1965 and 1966. She has shared the bill with such luminaries as Joe Williams, Tony Bennett and Ella Fitzgerald.[2] From 1969-1972, a three-year residency as the Count Basie Orchestra "girl singer." In 1972, in semi-retirement, she gave birth to her only child, R&B singer Adriana Evans.[3]

Stallings returned to full-time singing at the end of the 1980s and finally came to the attention of the national jazz audience with the 1994 release of the aptly titled I Waited for You on Concord Jazz, is a feel-good session with pianist Gene Harris quartet, featuring Ron Eschete (guitar), Luther Hughes (bass), and Paul Humphrey (drums). Stallings and Harris share a deep affinity for the blues, and the pianist takes a break from his usual build-to-a-crescendo style to play some highly lyrical passages. Highlights include two Benny Carter tunes, "Only Trust Your Heart," and the wonderfully swinging opener "Where or When."[4]

The album entitled Spectrum (1995) features a group of true professionals who know what accompanying a singer's is all about. Pianist Gerald Wiggins leads the rhythm section with Ron Escherte (guitar), Andy Simpkins (bass), and Paul Humphrey (drums). Trumpeter Harry "Sweets" Edison contributes to six tunes. Stallings sings with precision and finely calibrated emotional nuance throughout, capturing perfectly the pathos of "Solitude" and the wishfullness of "Some Other Time." A relaxed, highly swinging session.

In Manhattan Moods (1997), pianist Monty Alexander covers a variety of moods, from the sensuously slow, torchy rendering of the bop anthem "How High the Moon," to the Basie-ish groove of "Sweet and Lovely," to the playfully swinging version of "Surrey with the Fringe on Top." Bassist Ben Wolfe and drummer Clyd Lucas round out the rhythm section, while Hendrik Meukens adds some gorgeous harmonica work on two tracks and plays vibes on "He Was Too Good to Me." Dick Oatts plays flute on "How High the Moon" and "He Was." Though often thought as a Dinah Washington disciple, Stallings choice listening to Billie Holiday shows up on "Ghost of a Chance" and "You Go to My Head."

Remember Love (2005), brilliantly produced by Geri Allen, who plays piano and organ but also provided all of the arrangements. Stallings is heard throughout at the peak of her powers. Among the many high points are a touching version of "Hello Yesterday," very slow renditions of "Dindi" and "Lucky to Be Me," a duet with bassist Darryl Hall on "Centerpiece," a swinging and joyful "I Just Found Out About Love," a haunting "Remember Love," and Dinah Washington's "What a Difference a Day Makes." This is one of Mary Stallings' finest recordings and is highly recommended, it peaked at No. 23 on the Billboard chart.[5]

List of performances. To name just a few, Mary Stallings has played at the legendary Monterey Jazz Festival 1965, 1995, 2003 and 2013. The San Francisco Jazz Festival 2001, 2004, and 2006 was backed by the powerful 15-piece Marcus Shelby Jazz Orchestra, with pianist Geri Allen[6] Performed 2005 with Clark Terry at the Blue Note Jazz Club in New York. The 2007 Georgia's Savannah Music Festival accompanied by The Eric Reed Trio with Wycliffe Gordon.[7] Jazz at Lincoln Center (2007), The Birth of Cool, highlighted Ms. Stalling's interpretation of the Billie Holiday standards "Pennies From Heaven" and "Laughing at Life."[8]

This article uses material from the article Mary Stallings from the free encyclopedia Wikipedia and it is licensed under the GNU Free Documentation License.

Home One Day Baum
Update Required To play the media you will need to either update your browser to a recent version or update your Flash plugin.