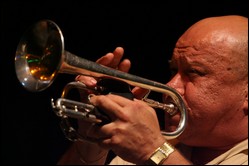 Warren Vaché (born February 21, 1951) is a jazz trumpeter, cornetist, and flugelhornist born in Rahway, New Jersey. He came from a musical family as his father was a bassist. In 1976 he released his first album.[1] He has often worked with Scott Hamilton and has some popularity among swing audiences.[2]

Warren Vaché's father is Warren Vaché Sr., who was a jazz double-bassist.

This article uses material from the article Warren Vache from the free encyclopedia Wikipedia and it is licensed under the GNU Free Documentation License.

Write Your Day Katharina Busch
Update Required To play the media you will need to either update your browser to a recent version or update your Flash plugin.