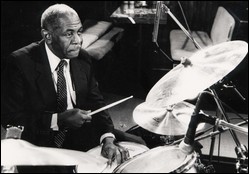 Roker was born into extreme poverty in Miami to Granville (Sr.) and Willie Mae Roker. After his mother died (his father never lived with them), when he was only ten, he was taken by his grandmother to live in Philadelphia with his uncle Walter, who gave him his first drum kit and communicated his love of jazz to his nephew.[1] He also introduced the young Roker to the jazz scene in Philadelphia, where drummer Philly Joe Jones became Roker's idol.

In the early 1950s, he began to gain recognition as a sensitive yet hard-driving big-band drummer. He was especially favored by Dizzy Gillespie, who remarked of him that "once he sets a groove, whatever it is, you can go to Paris and come back and it's right there. You never have to worry about it."[2] Roker was soon in demand for his supportive skills in both big-band and small-group settings. While in Philadelphia he played with Jimmy Oliver, Jimmy Heath, Jimmy Divine, King James and Sam Reed before moving to New York in 1959, where his first gigs were with Gigi Gryce, Ray Bryant, Joe Williams, Junior Mance, Nancy Wilson and the Duke Pearson big band.[2][3]

Roker was still active on the Philadelphia music scene during the 21st century. He died in Philadelphia, Pennsylvania, at the age of 84.[4]

With The N.Y. Hardbop Quintet

With Oscar Peterson and Stephane Grapelli

This article uses material from the article Mickey Roker from the free encyclopedia Wikipedia and it is licensed under the GNU Free Documentation License.

So Much Love Nada Surf
Update Required To play the media you will need to either update your browser to a recent version or update your Flash plugin.