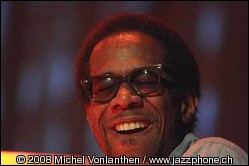 Blade was born and raised in Shreveport, Louisiana. The first music he experienced was gospel and songs of praise at the Zion Baptist Church where his father, Brady L. Blade, Sr., has been the pastor for fifty-two years. In elementary school, music appreciation classes were an important part of his development and at age nine, he began playing the violin. Inspired by his older brother, Brady Blade, Jr., who had been the drummer at Zion Baptist Church, Brian shifted his focus to the drums throughout middle and high school.[2]

The Fellowship Band and sideman work

As the Fellowship Band has grown, it has moved away from overt traditional references, even though they're an undercurrent throughout. Instead, as it explores milestones both inner and outer, Landmarks further speaks with the singular voice that the Fellowship Band has built upon since inception. Blending folkloric references, hints of church and spiritual concerns, jazz modality and countrified touchstones, Landmarks is the perfect name for Brian Blade & The Fellowship Band's fourth album; beyond its meaning to the group, it truly is yet another landmark recording in the core quintet's evolutionary travels. It may have come after a long gap in time, but that only makes it a wait all the more worthwhile.[3]

While continuing to work with the Fellowship Band, since 2000 Blade has also been a member of Wayne Shorter's quartet. He has also recorded with Daniel Lanois, Joni Mitchell, Ellis Marsalis, Marianne Faithfull, Emmylou Harris, Billy Childs, Herbie Hancock, and Bob Dylan.

On April 30, 2016, Blade played at the White House in Washington, D.C., as part of The International Jazz Day Global Concert.[6]

This article uses material from the article Brian Blade from the free encyclopedia Wikipedia and it is licensed under the GNU Free Documentation License.

Planets Unshakeables
Update Required To play the media you will need to either update your browser to a recent version or update your Flash plugin.