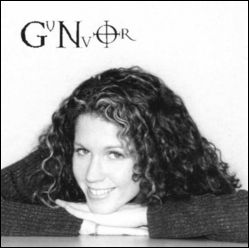 Gunvor Guggisberg (born August 23, 1974, Bern), known professionally simply as Gunvor, is a Swiss singer and dancer. She is from Bern and owes her name to her Swedish grandfather.

She represented Switzerland in the Eurovision Song Contest 1998 in Birmingham, England with the song Lass' ihn. She co-wrote the song with Egon Egemann. The performance joined an unfortunate group which scored zero points. The song had been one of the favorites before the show but her overblown diva pop failed to capture the audience's imagination. The song had been a clear winner in the Swiss heat held in Zürich on December 18, 1997.

Her musical role-model is Céline Dion, who successfully represented Switzerland in the Eurovision Song Contest 1988.

She has been Swiss tap dancing champion seven times. The year after her Eurovision appearance she was singing and dancing in a winter circus.

This article uses material from the article Gunvor Guggisberg from the free encyclopedia Wikipedia and it is licensed under the GNU Free Documentation License.