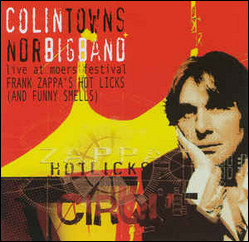 Colin William Towns (born 13 May 1948 in West Ham, London) is an English composer and keyboardist. He was noted as playing in bands formed by ex-Deep Purple singer Ian Gillan, and later worked extensively in composing soundtracks for film, television and commercials. Learning piano as a child, by the age of 13 he was earning money playing at weddings and birthdays in his neighbourhood of the East End of London. He went on to play in numerous dance bands, jazz ensembles and also became a session musician. His main musical passion is jazz and he has made several well-received albums together with his big band, the Mask Orchestra. He has also founded an independent record label, Provocateur.[1]

In 1976 he was recruited as keyboardist to replace Mickey Lee Soule in the Ian Gillan Band. Over the time he developed an increasing interest in composing, and Gillan credits the Towns-penned 'Fighting Man' as pointing the direction in which Gillan should go. Gillan dissolved the band, with its jazz-rock leanings, and retained only Towns, putting together the rockier Gillan. Encouraged by Gillan, Towns co-wrote many of the songs for the new band. Whilst with the band he used his free time to seek opportunities to compose music beyond the Heavy metal direction of Gillan. His 1980 solo album remains unreleased, although one track was reworked for the 'For Gillan Fans Only' LP, and Making Faces was released in 1982. He submitted a demo soundtrack for the 1977 Mia Farrow-starring film Full Circle, which received reviews praising the music. With bassist John McCoy, Towns guested on Samson's 1979 album 'Survivors'.

In 1982, Towns played with the Spanish rock band Barón Rojo, when they recorded Volumen Brutal.

In 1983, Ian Gillan dissolved the band, and Towns decided to pursue soundtrack composing full-time. In that year he won the commission to write the score for the film Slayground. From then on he was in constant demand, particularly in British television, where his body of work is extensive, and includes Chiller, An Unsuitable Job for a Woman, The Buccaneers, The Crow Road, Dalziel and Pascoe, Ghostboat, Rockface, Into the Blue, The Blackheath Poisonings, Bodyguards, Cadfael, Clarissa, Capital City, Noah's Ark, Pie in the Sky, The Beggar Bride, Our Friends in the North, Between the Lines, Mobile, Cold Blood, Anglo-Saxon Attitudes, Doc Martin, Half Broken Things, Foyle's War, Ivanhoe, Hot Money, Deceit and Imogen's Face.

He also composed the music for the popular children's animation series Angelina Ballerina as well as several other animation series and films for children including The World of Peter Rabbit and Friends, The Story Store, Truckers, The Willows in Winter, The Wind in the Willows, The Tale of Jack Frost, Oi! Get Off our Train, Toot and Puddle, Fungus the Bogeyman, The Sandman and Faeries.

Towns' principal musical passion is jazz and has released several albums with the big band he founded, the Mask Orchestra. A long-term collaboration with the Italian-born jazz singer Maria Pia De Vito began in 1996.[2]

This article uses material from the article Colin Towns from the free encyclopedia Wikipedia and it is licensed under the GNU Free Documentation License.

Take Another Day 2Another
Update Required To play the media you will need to either update your browser to a recent version or update your Flash plugin.