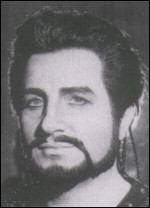 He studied at the Academy of Vocal Arts in Philadelphia after winning the Mario Lanza Award in 1968. In 1973 he debuted as Osaka in Mascagni's Iris at the Gran Teatre del Liceu in Barcelona and then became a naturalized American, appearing as Turiddu in Cavalleria Rusticana at the New York City Opera.

Bartolini returned to Italy in January 1982 and featured in the La Scala di Milano in the title role of Ernani. He later sang at some of the most prestigious opera houses in Europe, in Vienna, Munich, Hamburg, Berlin, Paris, Covent Garden, London and the Arena di Verona as well as South America.[1]

In 1986, he replaced Luciano Pavarotti in a production of Ernani at the Lyric Opera of Chicago which garnered him critical acclaim and in 1988 he made his debut with the Metropolitan Opera.

This article uses material from the article Lando Bartolini from the free encyclopedia Wikipedia and it is licensed under the GNU Free Documentation License.

Gone for Tonight Highland Sanctuary
Update Required To play the media you will need to either update your browser to a recent version or update your Flash plugin.