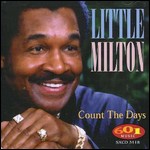 Milton was born James Milton Campbell Jr., in the Mississippi Delta town of Inverness and raised in Greenville by a farmer and local blues musician.[2] By age twelve he was a street musician, chiefly influenced by T-Bone Walker and his blues and rock and roll contemporaries.[2] He joined the Rhythm Aces in the early part of the 1950s, a three piece band who played throughout the Mississippi Delta area.[3] One of the group was Eddie Cusic who taught Milton to play the guitar.[4] In 1952, while still a teenager playing in local bars, he caught the attention of Ike Turner, who was at that time a talent scout for Sam Phillips' Sun Records. He signed a contract with the label and recorded a number of singles. None of them broke through onto radio or sold well at record stores, however, and Milton left the Sun label by 1955.[2]

After trying several labels without notable success, including Trumpet Records,[5] Milton set up the St. Louis based Bobbin Records label, which ultimately scored a distribution deal with Leonard Chess' Chess Records.[2] As a record producer, Milton helped bring artists such as Albert King and Fontella Bass to fame, while experiencing his own success for the first time.[2] After a number of small format and regional hits, his 1962 single, "So Mean to Me," broke onto the Billboard R&B chart, eventually peaking at #14.

Following a short break to tour, managing other acts, and spending time recording new material, he returned to music in 1965 with a more polished sound, similar to that of B.B. King. After the ill-received "Blind Man" (R&B: #86), he released back-to-back hit singles. The first, "We're Gonna Make It," a blues-infused soul song, topped the R&B chart and broke through onto Top 40 radio, a format then dominated largely by white artists. He followed the song with #4 R&B hit "Who's Cheating Who?" All three songs were featured on his album, We're Gonna Make It, released that summer.

Throughout the late 1960s Milton released a number of moderately successful singles, but did not issue a further album until 1969, with Grits Ain't Groceries featuring his hit of the same name, as well as "Just a Little Bit" and "Baby, I Love You". With the death of Leonard Chess the same year, Milton's distributor, Checker Records fell into disarray, and Milton joined the Stax label two years later.[2] Adding complex orchestration to his works, Milton scored hits with "That's What Love Will Make You Do" and "What It Is" from his live album, What It Is: Live at Montreux. He appeared in the documentary film, Wattstax, which was released in 1973.[6] Stax, however, had been losing money since late in the previous decade and was forced into bankruptcy in 1975.[2]

After leaving Stax, Milton struggled to maintain a career, moving first to Evidence, then the MCA imprint Mobile Fidelity Records, before finding a home at the independent record label, Malaco Records, where he remained for much of the remainder of his career.[2] His last hit single, "Age Ain't Nothin' But a Number," was released in 1983 from the album of the same name.[2] In 1988, Little Milton was inducted into the Blues Hall of Fame and won a W.C. Handy Award.[2] His final album, Think of Me, was released in May 2005 on the Telarc imprint, and included writing and guitar on three songs by Peter Shoulder of the UK-based blues-rock trio Winterville.

Milton’s song "Let Me Down Easy" was recorded by the Spencer Davis Group on The Second Album (1965), but his authorship was not acknowledged on the record. He released a single of it himself in 1968 on Checker.[7] It was also chosen by Etta James as the final track in her final album The Dreamer in 2011.

Appearances on other albums

"Any category they want to put me in is fine with me as long as they accept what I do." — Little Milton[9]

This article uses material from the article Little Milton from the free encyclopedia Wikipedia and it is licensed under the GNU Free Documentation License.