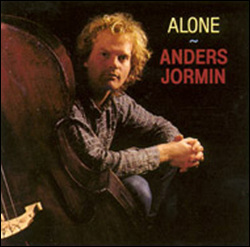 Jormin established a musical partnership with Bobo Stenson in the mid-1980s which led to international recognition playing with Charles Lloyd, in the early 1990s. In the late 1990s he also performed regularly with Polish trumpeter Tomasz Stańko.

Anders Jormin also teaches double bass and improvisation and holds a Professorial post at the Academy of Music and Drama at Gothenburg University since 2002. In 1995 he undertook a visiting professorship at the Sibelius Academy in Helsinki. The same appointed him Doctor honores causa (honorary doctorate) in 2003.[2]

Anders Jormin grew up in a musical family with a father who was a professional jazz musician and learned to perform jazz standards at an early age, he studied classical music on piano and bass at the University of Gothenburg and has a long-standing appreciation of folk music and combines classical music with folk and jazz in his compositional approach.[3] Anders Jormin brother is a percussionist and pianist Christian Jormin.

Jormin has received several awards including the Jan Johansson Scholarship (1992), Jazz Kannan (1994) and a Swedish Grammy for best Jazz album with the Bobo Stenson Trio, Reflections (1996). In November 2010 he was awarded the Swedish Royal Music Academy Jazz Prize.

As leader and sideman

This article uses material from the article Anders Jormin from the free encyclopedia Wikipedia and it is licensed under the GNU Free Documentation License.

One More Year Patricia Kelly
Update Required To play the media you will need to either update your browser to a recent version or update your Flash plugin.