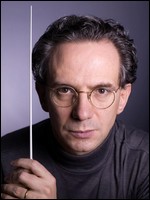 Fabio Luisi (born 17 January 1959) is an Italian conductor. He is general music director of the Zurich Opera and principal conductor of the Danish National Symphony Orchestra.

Luisi was born in Genoa. He attended the Conservatorio Nicolò Paganini and was a student of Memi Schiavina. After receiving his degree in piano studies, he continued piano instruction with Aldo Ciccolini and Antonio Bacchelli.

Luisi served as Chief Conductor of the Vienna Symphony from 2005 to 2013 season.[5][6] He became Generalmusikdirektor (General Music Director) of the Zurich Opera in 2012, which also includes orchestral concert work with the opera orchestra under the name of the Philharmonia Zurich.[7] Luisi first conducted the Danish National Symphony Orchestra in 2010. In August 2014, the orchestra announced the appointment of Luisi as its next principal conductor, effective in 2017, with an initial contract through 2020.[8][9] In January 2016, the Opera di Firenze announced the appointment of Luisi as its next music director, the first conductor to hold that title with the company, and in parallel, as director of the Maggio Musicale Fiorentino, as of April 2018, with an initial contract of 5 years.[10]

In the United States, Luisi made his Metropolitan Opera conducting debut in March 2005, with Giuseppe Verdi's Don Carlo.[11] In April 2010, Luisi was named the Met's principal guest conductor, for an initial contract of three years, effective with the 2010-2011 season. Luisi is the second conductor to be named to this post at the Metropolitan Opera, after Valery Gergiev.[12] He was elevated to the post of Principal Conductor in September 2011, when Music Director James Levine withdrew from his scheduled fall 2011 performances. Luisi stood down from his Metropolitan Opera post at the close of the 2016-2017 season.[13]

Luisi has conducted several opera recordings, including Giuseppe Verdi's Aroldo, Jérusalem and Alzira,[14] and Gioacchino Rossini's William Tell.[15] He won a Grammy Award for his leadership of Siegfried and Götterdämmerung on a Deutsche Grammophon DVD release of Richard Wagner’s operatic cycle, Der Ring des Nibelungen. This was recorded live at the Metropolitan Opera and named Best Opera Recording of 2012.

Luisi and his wife Barbara Luisi, a photographer and violinist, have three sons.[6] Outside of music, his hobbies include perfumery and the production of his own personal line of perfumes.[16]

This article uses material from the article Fabio Luisi from the free encyclopedia Wikipedia and it is licensed under the GNU Free Documentation License.

Baby Don't Go Fabian Anderhub
Update Required To play the media you will need to either update your browser to a recent version or update your Flash plugin.