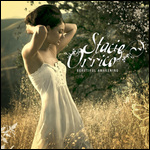 Stacie Joy Orrico (born March 3, 1986) is an American singer, songwriter, and occasional actress. In 1998, she signed to ForeFront Records when she was 12 years old, and recorded her first album, Genuine (2000), which sold 13,000 in its first week of release.

After her first album, she signed to a new record label, Virgin Records, and started to record her self-titled album Stacie Orrico (2003). The album, which debuted at No. 59 on the Billboard 200, was certified gold with over 500,000 sales in the US. The first single "Stuck" reached number No. 52 on Billboard Hot 100,[1] but achieved greater success worldwide. Her second single "(There's Gotta Be) More to Life" debuted at No. 30 on the Billboard Hot 100.[2] Her self-titled album has achieved sales worldwide of over 3.5 million. In the same year, she made her first television appearance as an actress in two episodes of American Dreams.[3][4]

She lost her label ForeFront Records in 2005 after 7 years and decided to concentrate on her music career and began writing her third album, Beautiful Awakening (2006). The first single "I'm Not Missing You" was released in August 2006. The second single, "So Simple", is the last single from her third album which never charted in the US.

Orrico was born in Seattle, Washington to Patti (née Schmautz) and Dean Orrico.[5][6] The family later moved to Denver, Colorado, where Stacie took piano lessons from Cathy Paquette. Orrico is the middle child of five: her siblings are Jesse, Rachel, Alicia, and Joshua. Both parents loved to travel, requiring the family to move frequently. She grew up influenced by a wide range of musical styles and was a member in the church choir; she often accompanied on the piano as the family sang Christian hymns. At age 6, Stacie wrote her first song entitled 'Always Answer'.

Orrico got her start in 1998, at the age of 12, by attending a Christian music festival, Praise in the Rockies, held in her then-home state of Colorado. Orrico inadvertently entered a high-stakes talent competition, and won. A ForeFront Records executive was on hand and approached her for a record deal. She later signed with them. In 2001, she toured with Destiny's Child on their Survivor US tour.[7]

Since then, she has released two albums. The first was Genuine (2000), which she recorded at age 14. It sold over 13,000 copies in the first week, the highest debut week sales ever for a female Christian artist. The album produced the hit single "Don't Look At Me" which topped Christian charts for ten consecutive weeks. The album had two #1 hits, as well as three more Top Ten singles. Genuine eventually sold 500,000 copies,[8] giving the album Gold certification on word-of-mouth alone.

In 2001, 15-year-old Stacie released her only Christmas album, Christmas Wish. The 6 tracks were: "Christmas Wish," "Love Came Down," "O Holy Night," "What Child is This," "O Come All Ye Faithful," and "White Christmas."

Her next effort, the more mainstream and self-titled album Stacie Orrico, was released in 2003 and charted on the US Billboard 200 (debuting at number 67), Australian ARIAnet and the UK Albums Chart. The first mainstream single from this album was "Stuck", which became a worldwide hit, reaching the Top 5 on the majority of the world's charts. This was followed by the single "(There's Gotta Be) More to Life", which peaked in the Top 20 in Australia (#11) and the UK (#12), although, overall, "Stuck" charted better, the exception being in the US. This was then followed by "I Promise", written by and Stacie Orrico (top 30 in the UK), and the final mainstream single "I Could Be the One" (top 40 in the UK on June 2004). Both singles were given limited releases and limited promotion, meaning they did not fare as well as the first two singles. The last three singles were only released to Christian radio in addition to "Strong Enough", which reached #1 as the CD's very first single. Stacie Orrico sold over 500,000 copies in the US, enough sales for a Gold certification. The album also sold 600,000 in Japan and an estimated 3.4 million copies worldwide.

She was nominated in 2004 for the first time at the 46th Annual Grammy Awards in the category Best Pop/Contemporary Gospel Album, but the award was given to Michael W. Smith.

After her break, she decided to work on her new album, called Beautiful Awakening, which was set to be released worldwide on August 29, 2006; however, for reasons unknown, the release of the album was postponed in the US.[9] In an interview, she said that the album was one of the best albums she has worked on and was a personal album; the songs are about her life and more. Though almost all of the songs from the new album leaked onto the internet, Beautiful Awakening was still released in Japan, the UK, and other countries. The album features production from Dallas Austin, Dwayne Bastiany, KayGee, and The Underdogs, and writing duties are performed by notable songwriters like She'kspere, Track & Field, Anthony Dent, Nate Butler and newcomer Novel and Orrico herself. The album sold 100,000 copies in Japan.[10]

The first single, "I'm Not Missing You", went for radio adds on June 20, 2006, but due to little promotion was re-released in October. The song peaked at #19 on the Bubbling Under Hot 100 Singles chart. The second single from the album, "So Simple," was released in Asia in October 2006 and was released in Europe on January 27, 2007. The album release in the US and Canada was canceled and Orrico has no sign of an official US release. "Beautiful Awakening" is available to purchase on iTunes.[11]

In 2007, the belated release of Beautiful Awakening was postponed again. In March, Orrico announced to fans that Virgin Records was merging with Capitol Records and she had left them and would not be releasing the album with that label. She decided to take a long break again, but the break does not seem completely voluntary. Her record company terminated co-operation with Stacie and tour dates were called off. The background to these developments is unclear. On her Myspace it was announced that she would spend time in Africa.[12]

After a long break from the public eye, Orrico headlined the QB Goes Live concert on March 15, 2008 in Cambodia, performing to an audience of over 50,000 at the Phnom Penh Olympic Stadium.[13] Orrico also appeared at Singfest Festival in Singapore. She also held a short Japan tour in July 2008 in Tokyo, Osaka and Fukuoka. Orrico collaborated with producer and songwriter Toby Gad and Onree Gill in 2008.[14]

In 2009, she was back in the studio with Brandon Beal and Cannon Mapp to record her upcoming fourth album. One of the tracks she recorded was 'Light Years' which should appear on her next album.[15] Later the song did not make the album and was re-recorded by Albanian-American artist Kristine Elezaj in 2010.[16]

In 2010, she co-wrote a song with Novel for American Idol-winner and R&B-singer Fantasia Barrino called "I Can't Be Without You" for her third studio album "Back to Me". Unfortunately the song did not make the final album.[17][18] Rumor has it that Orrico would retire from the music business, but her longtime-collaborator Novel confirmed in 2010 that Orrico is still writing music[19] and in 2011, her friend Rachael Lampa also confirmed Orrico's musical return.[20]

In 2012, she featured on The Fray's third studio album Scars and Stories on the track "Ready or Not", which is a cover the The Fugees. The song is only available on the deluxe edition bonus disc of the album. She independently released a new song called "Catch Me If You Can" on April 2, 2012. "Catch Me If You Can" is composed and performed by Orrico and The Gabe Cummins Orchestra, which has a jazzy sound. A release date for a new album was never confirmed.[21]

Orrico is hitting the comeback trail and plans to release new music for the first time since 2006. She posted a video on her YouTube account on October 7 explaining where shes been hiding for the past seven years and what people can expect from her return.[22][23]

Orrico talks about traveling, working in the studio and reconnecting with friends. She also reveals shes been studying womens literature and acting. According to her YouTube account is working on a R&B record for 2014. To celebrate her comeback she performed a virtual concert on November 6 via Stageit.com.[24]

While recording the album she worked with a variety of collaborators for the album, including producers Allen Stone, Hal Linton, Gabe Cummins, and The Lion's.[25]

Orrico is scheduled to film a music video for her upcoming album in Malibu in May. The album, which is slated for a mid year-fall release is a soul/RnB influenced album.

When asked about her influences, she responded: "All of my influences are very soulful musicians my favorite artist is Lauryn Hill, and I've always loved Whitney Houston, Mariah Carey and Ella Fitzgerald and I wanted to explore that direction more."[26] She said when she was young, she listened to Alicia Keys, Crystal Lewis, Monica[27] and Destiny's Child.[28][29] Her other musical influences include Billie Holiday, Sarah Vaughan and Toni Braxton.[30]

After the release of Stacie Orrico and the singles from that album, Orrico decided she did not want to pursue her career in music any further, the Christian pop singer exited the business, returned to her family in Seattle and took a waitressing job at a neighborhood seafood restaurant. She started recording again and developed a new album Beautiful Awakening.

She is also best friends with Christian pop singer Rachael Lampa and R&B singer Jayms Madison. Orrico and Lampa have been friends since 2001 and have toured together. Orrico was a bridesmaid at Lampa's wedding in 2010.

In February 2007, Orrico left Virgin Records due to its merging with Capitol Records. Stacie Orrico then traveled to South Africa, as a volunteer with Cross-Cultural Solutions, to help children with AIDS. She has since returned from South Africa and currently resides in New York, where she stated on her Twitter that she is taking acting classes.[12]

This article uses material from the article Stacie Orrico from the free encyclopedia Wikipedia and it is licensed under the GNU Free Documentation License.